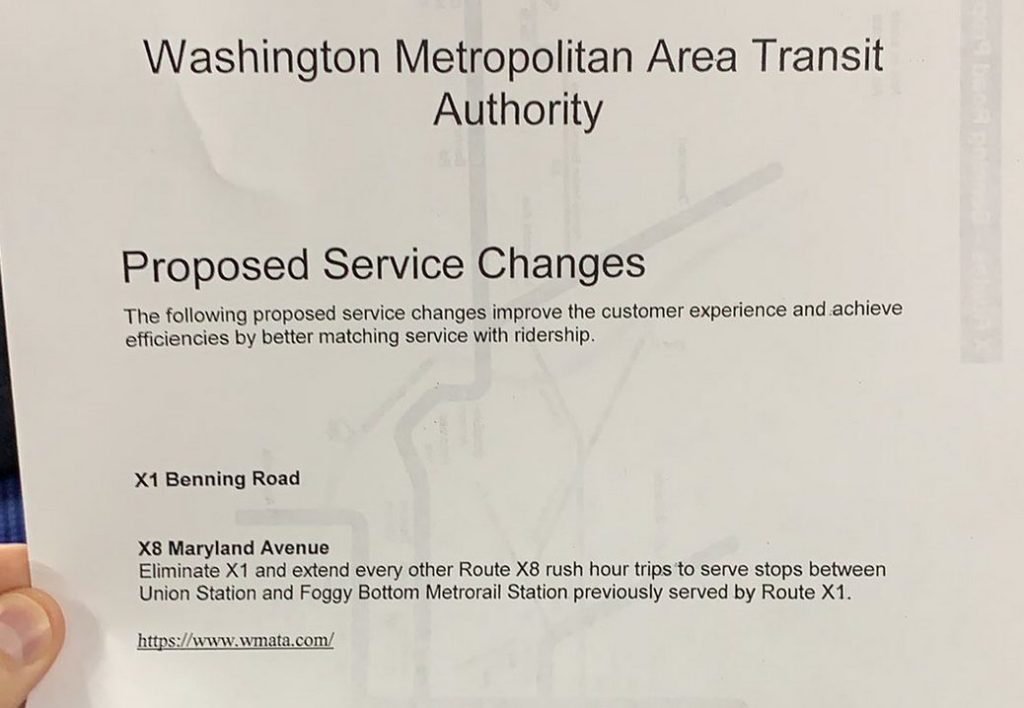 Thanks to Craig for sharing this WMATA Survey on proposed fare and service changes for both bus and metrorail.

More details on the proposals from WMATA:

The following proposed fare changes include both fare reductions and increases to simplify fares and encourage pass product use.

Increase peak fares
Adjust peak fares (weekdays from 5 -9:30 a.m. and 3-7 p.m.) by:
Increasing the base fare up to 25¢, from $2.25 to $2.50
Increasing the maximum fare up to $1, from $6 to $7
No maximum fare increases for MetroAccess
Prices on all current Rail + Bus unlimited passes will not change and will still be valid for the same travel.
Adjust Senior/Disabled fares to half of peak and off-peak fares
People with Senior SmarTrip® cards and people with disabilities with a Reduced Fare SmarTrip® Photo ID card will pay half the peak or off-peak fare on Metrorail depending on time of day instead of peak only.
Charge peak fare prices after midnight
Customers who ride late night between midnight and closing on Friday and Saturday nights will pay peak fares.
Charge a flat fare on weekends
Simplify the fare structure on Saturdays and Sundays and charge a flat fare, up to $2.75 ($1.35 Senior/Disabled).
Simplify mileage tiers
Since Metrorail fares are determined by the distance traveled, customers currently pay the base fare plus an amount per mile after the first three miles, then a different amount per mile after six miles up to the maximum fare. Instead of these two different per-mile fees, there will only be one per-mile fee of 33¢ per mile during peak hours and 22¢ per mile during off-peak hours.
Add a surcharge at Dulles Airport Metrorail Station
Customers will pay a rail surcharge of $1 for entries and exits at the new Dulles Airport Metrorail Station, part of Silver Line Phase 2. The surcharge will not be applicable to those using passes.

Lower the price of the 7-Day Regional Bus Pass
Decrease the price of the 7-Day Regional Bus Pass from $15 to $12 (Senior/Disabled $6).
Add a 25¢ surcharge for cash use
Paying with cash or adding value to your SmarTrip® card on the bus with cash will cost an additional 25¢ on top of the regular fare in order to encourage customers to pre-load SmarTrip® cards and speed up the boarding process for all riders.
Increase the fare on MetroExtra routes
Adjust the regular fare on MetroExtra limited-stop routes from $2.00 to $3.00 (Senior/Disabled $1.50).

Increase the transfer discount between Metrorail and Metrobus
Metrobus customers will receive a discount of $2 (equivalent to free fare on most Metrobus routes) when transferring to/from Metrorail instead of 50¢.
Add new Short-Trip and Weekend Passes
Increase the variety of unlimited Metrorail + Metrobus passes to encourage additional weekend and tourist ridership.
New Short-Trip Passes
1-Day Short-Trip Pass $8
3-Day Short-Trip Pass $18
Short-Trip passes cover all trips taken during off-peak and fares up to $3.85 during peak periods. If customers take a trip with a fare above $3.85, the difference is paid using SmarTrip® stored value.
New Weekend Passes
1-Day Weekend Pass Up to $6
2-Day Weekend Pass Up to $10
New Weekend Passes are applicable only if a weekend flat fare is approved by the Metro Board of Directors. The price point will be determined by the flat fare that is approved.

The following are brief descriptions of the proposed bus service changes.