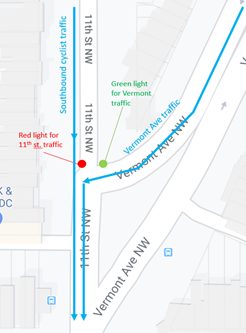 11th Street is a known cyclists’ highway, with hundreds of cyclists heading south in the mornings. The place where 11th street meets Vermont Ave is a T-intersection, meaning that southbound traffic coming from Vermont Ave must turn either left or right onto 11th street. This seems to give 11th street cyclists the impression that the traffic light at this intersection can be ignored. When Vermont Ave traffic has a green light, meaning 11th street traffic has a red light, cyclists traveling south on 11th will blow right through their red light, into the intersection while cars and cyclists are trying to merge from Vermont. Almost never do they bother to slow down or even glance over to see if cars (or cyclists!) are coming before running the red light.

Frequently, as both a cyclist and a driver, I’ll be headed down Vermont and make the left onto 11th while I have the green light, only to have to brake abruptly as several cyclists burst into my path from 11th. I’m a cyclist too and agree that it’d be too much to expect cyclists to stop fully at that red light, but shouldn’t they at least check if anyone’s coming before running the red? It’s infuriating, not to mention dangerous, that 95% of cyclists treat this intersection as an uninterrupted straightaway. I think this problem could be solved by a dedicated traffic light for bikes, making it clear to cyclists that they too are expected to stop or yield when intersecting traffic has the right of way. Thoughts?