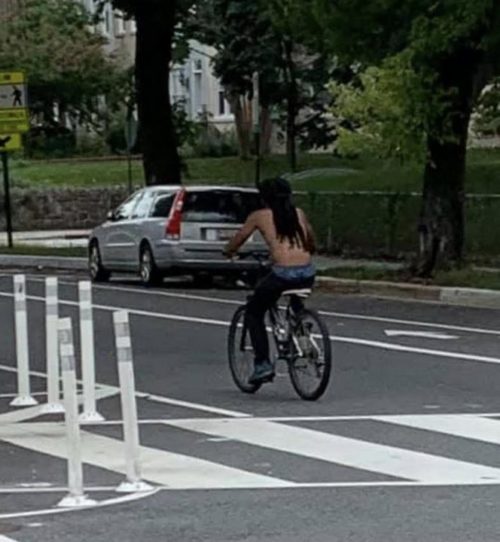 A friend of mine was sexually assaulted by a shirtless man on a bike this weekend on L St. NW between 4th and 5th. She has heard from at least one other woman who has a similar story. She has allowed me to share her story so that others can be aware:

I left my apartment to meet a friend and within 20 meters of my home, across the street from a Safeway surrounded by plenty of humans, a man on a bicycle came up behind me and grabbed under my shorts up into an uncomfortable private place. He passes me and looks back at me making eye contact and says “that’s a nice soft ass”.

I actually thought maybe it was a friend when it first happened. Someone I trusted, a joke. Who else would dare? But no. I am no stranger to cat calls and vulgar taunting in DC. But this is the first time I’ve experienced physical assault. A man grabbed underneath my shorts and into my private area. And then he had the balls to turn around when he was in front of me and taunt me like he did me a favor.

He was too far away for me to physically retaliate. And he actually looked scared that I could.

Matches the description from this police report:

The suspect approached the victim in the 700 block of 17th Street, Southeast. The suspect engaged in unwanted sexual contact with the victim then fled the scene. CCN: 19-118-603

The suspect approached the victim in the 100 block of 11th Street, Northeast. The suspect engaged in unwanted sexual contact with the victim then fled the scene. CCN: 19-118-555

The suspect approached the victim in the 800 block of Kentucky Avenue, Southeast. The suspect engaged in unwanted sexual contact with the victim then fled the scene. CCN: 19-118-562

The suspect is described as a black male, 20-25 years-old, approximately 140lbs, slim/muscular build, dark skin tone, long dreadlocks or braids, and was last seen wearing no shirt and dark colored pants. In each case, the suspect fled the scene on a bicycle.

More Stories
“Mail Theft and Local Hero”There are no excuses for these idiots.