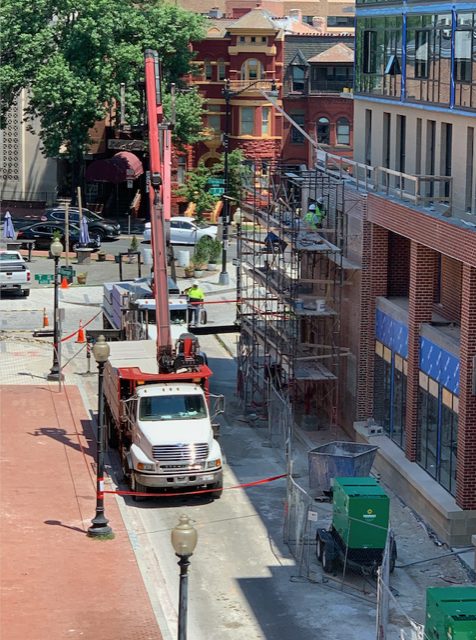 I wanted to send along a frustrating saga of a developer getting its way by blocking roads in my neighborhood daily.

The condo construction site, at 6th and Wiltberger Streets NW, constantly blocks the entire width of Wiltberger. This means traffic — or if an emergency happens, first responders — can’t get through for the entire block. This has been happening daily, and the portable crane that lifts drywall and other materials into the new nearby condos have no permits, per DDOT’s searchable tool.

But let’s get to enforcement. I’ve tried reaching out to DDOT’s main number and to senior management to no avail. I get the run-around at DCRA. I emailed the fire department, but no response yet.

I finally called the non-emergency police line through 311, seeing as they’re at minimum breaking traffic laws, and MPD was sent out. Alas, the cop got out for a brief second, exchanged a few words, and left. No tickets were issued. Of course, the crane went back to operating illegally the moment he drove off.

A normal citizen like me should haven’t to spend this much effort in DC tying to make sure the rules are followed for my and my neighbors’ safety. (Even so, it’s still not fixed.) You can bet, though, if I so much as left my car illegally parked for an instant, I’d have 10 tickets on my windshield.

An update: MPD ultimately came back and shooed them away after I emailed the command staff.“