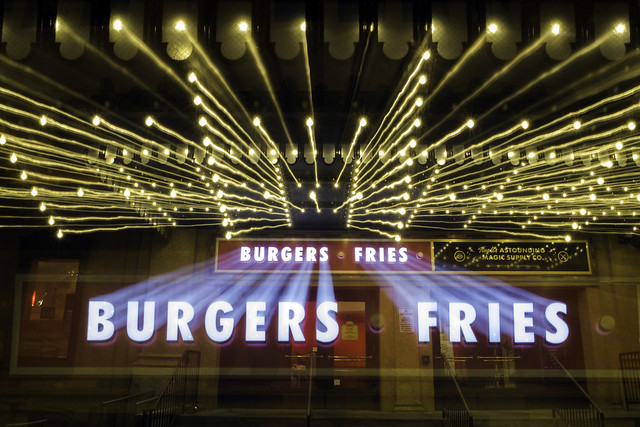 Ed. Note: After our best burger talk last month I got word of a mythical burger quest by a group of friends and lo and behold here it is.

“Back in 2017 a group of 10 nerds, who also happened to be friends, decided to embark on an epic foodie quest to try the best burgers of DC. Our goal was simple: systematically and rigorously pinpoint the tastiest burger in and around the District. And we were serious. We even bought the domain to BrosWhoBurger.com (and then never did anything with it).

Our starting point was a list of 8 restaurants based on the existing “Best of” lists and hearsay. Over the next two years, this group of 8 ballooned to a whopping 18 burger joints. We still haven’t gone everywhere we have wanted to, but hope to in the years to come.

So how did we approach this journey? Each time we picked a new place, we tried to maximize how many people could join. Usually we got 4-7 of us, but sometimes as low as 2, other times we had as many as 9 of us.

We didn’t have pre-defined criteria for the ratings, but there were some elements we often found ourselves discussing; bun composition and texture, structural integrity, meat taste and juiciness, and overall flavor were key pieces to our rating. We did not factor cost into the equation.

With some minor exceptions, we all ordered the same burger at each place. When we finished, we shared our ratings directly with a designated data collector in order to minimize bias and plopped the ratings into a Google sheet.

NOW, without further ado, our ratings. With each we tried to add a description. Below these are our superlatives.

THE EXCEPTIONAL: Cream of the crop, The Colossus of Clout, The Great BAM-BIN-O

Bourbon Steak (in 2017), Rating: 9.4/10
The 2017 Bourbon Steak burger at the Four Seasons is almost mythical these days after the quality plummeted more recently (see below). Clocking in at $26 for *only* the burger, this mythical wonder was all about the quality of the meat – no extraneous toppings there to mask or distract from anything subpar – and the exquisite bun. It was the burger patty upon which to measure all burger patties. It also cost a fortune.

2. The Capital Burger, Rating: 8.0/10
This relatively new, semi-touristy spot came in second. Despite them pushing the wine-burger pairings a bit too hard, the burger itself was undeniably excellent. The meat is nicely seasoned and juicy, the bun holds up well, and the toppings are simple and delicious (candied bacon anyone?!). It’s got excellent weight and structure with enough variety to please the most discerning of burger lovers. The burger dollar value is superb.

3. Gaslight Tavern – 7.8/10
Your classic American smashed double cheeseburger with a touch of special onion escabeche to spice it up. A late addition to the list that was a pleasant surprise and one that we’ve continued to order since the original tasting.

4. Duke’s Grocery – 7.6/10
This little diddy shows up on all of the “Best of” lists for burgers in DC. Despite dropping into the arbitrary next echelon “Great,” Duke’s Proper Burger was worth every penny. The chili sauce and garlic aioli was *chef’s kiss.* A bonus nod for the elote appetizer.

5. Mirabelle – 7.6/10
Pricey, and only available at lunch, so feels a wee bit pretentious. But this one is worth a try. It’s served in a “wet-style” which if not eaten quickly, could pose structural integrity issues.

6. Eat Bar – 7.3/10
An excellent burger. Consistent on repeat trips. You will not leave Eat Bar unsatisfied if you’re looking to calm the burger beast.

8. Ray’s Hell Burger 6.9/10
The best aspect of this burger is the establishment’s DGAF attitude about the space. The makeshift bar was a speaking podium with four bottles of liquor. Someone’s iPhone was hooked up to cheap speakers playing music for the whole place. No ambiance, no atmosphere. They make it clear that their focus is on the burger and only the burger. They let the burger speak for itself, but it doesn’t speak, it SINGS. And for the best value at $7. Not much of a quality drop from the original Arlington location which is no longer with us.

9. Unconventional Diner – 6.7/10
With scores ranging from 5-8, this one was a bit polarizing. Easily packed the most meat of the bunch, with a classic double cheeseburger. It was solidly worthwhile, but nothing to write a whole blog post about.

A 6.5 really isn’t bad, but expectations were through the roof during a repeat visit after our first visit drew so many accolades. Maybe our expectations soured the experience, but something was qualitatively different from the 2017 Bourbon Steak burger.

11. Annie’s – 6.3/10
When six dudes couldn’t snag a table at Duke’s, we went on a search for burger nearby and landed down the road at Annie’s with low expectations in tow. But what a pleasant surprise! The burger was solid and will satisfy your craving despite not appearing on many lists.

13. Taylor Gourmet (RIP) – 6.3/10
Why do we get the feeling that the burger offering was a last ditch effort to keep the ship afloat? It was greasy and it was good, but it was still fast food.

14. Le Diplomate – 6.0/10
You can’t make a slightly-above-average wanna-be Big Mac better by planting an American flag in it, but that’s what it appears the Dip is doing here. The reputation of the burger seems to garner much higher praise than our taste buds indicated. Beef up the beef and top up the toppings and perhaps this burger gets rebuilt more beautiful than it was before.

15. Valor Brew Pub – 6.0/10
Went here more in search of a new brew rather than a burger and the burger ended up being fine, if unremarkable. The stories told by the bartender, on the other hand, were legendary. Bill Murray hopping behind his old bar and pouring tequila for everyone no matter what drink order they placed? If only the burger was good enough to help us achieve total consciousness. Gunga Galunga.

16. Salt Line – 5.5/10
For a seafood restaurant, the burger is fine. For a burger lover, it was disappointing. You’d think a restaurant focusing on food from the sea would be able to ascertain the proper amount of juiciness in a bite, but you’d be wrong. Dry meat, sad faces, can lose.

17. Slash Run – 5.5/10
The feel of this place alone should have added at least a few decimal points to the score. But we stuck to our guns. The burger composition was sloppy and the meat was inconsistent in its preparation.

18. Classics – 3.3/10
No. Keep out. Stay away. Steer clear. The only legitimately *bad* burger we had in our quest. The buns were dry and falling apart. The meat was dry, grainy, and falling apart. Our hearts were sad and falling apart. This burger was bad to the point of hilarity. We laughed. We cried. We died a little inside. Before the Classics takes another look at how to fix this burger, they must first take a look at themselves.

Most surprising (Good): Gaslight
What can be said that hasn’t been said above. We simply hadn’t heard of this place, and it’s burger is an absolute delight.

Most surprising (Bad): Le Diplomate
So much hype. So little to write home about. Le Sad.

Best meat: Bourbon (2017)
$26 for a single hamburger without fries. And yet, it was worth every damn penny. Please come back, 2017 Bourbon Burger.

Best bun: Bourbon (2017)/Gaslight Tavern (TIE)
Who knew how important a bun was? Needs the right composition throughout the burger, the right moisture, flavor, and so on. Bourbon in 2017 and Gaslight had two buns that hit all of these criteria.

Most Polarizing: Unconventional Diner
Generally speaking there was a lot of groupthink going on in the ratings, despite our best efforts at data quality. Or we just developed the same taste after so many burgers. Who knows. Either way, Unconventional Diner topped our most polarizing with scores ranging from 5 to 8.

Alright, that’s all we have. Looking forward to all of your civil feedback – and most importantly: Suggestions on where to go next.”