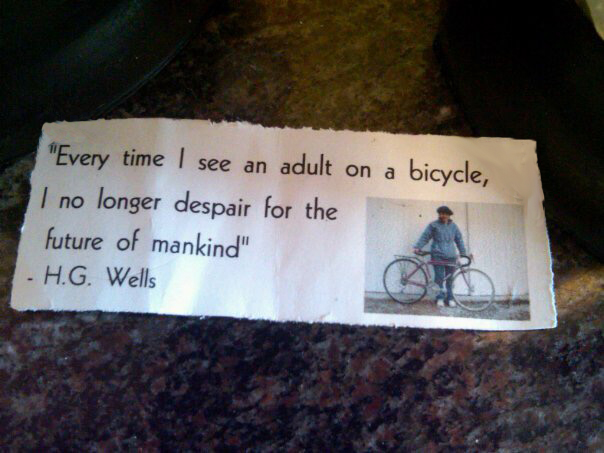 Cycling in D.C. was written by Joel Hoard. Joel lives in Adams Morgan.

“Eight years ago when I had just started riding a bike in D.C., I found a slip of paper inside a candy wrapper. On it was a quote by H.G. Wells: “Every time I see an adult on a bicycle, I no longer despair for the future of mankind.”

I’m 36 years old, and I love bikes. I ride them. I build them. I fix them. I talk about them to anyone who will listen. I ride to work. I ride to the grocery store. I ride to my friends’ houses. Sometimes I ride to nowhere in particular just because I love it.

I also love Washington, D.C. This is my home. I’ve lived here for 11 years, and I have no plans to leave. I’ve biked across all four quadrants of this city countless times. Seeing the place I love by bicycle is perhaps the simplest joy in my life.

But sometimes riding in this town sucks. For every leisurely ride around the Mall, there’s a driver speeding through a red light to shave 30 seconds off his morning commute. For every Saturday morning ride through Rock Creek Park, there’s an Uber driver swerving into a bike lane to drop somebody off or a car door flinging open. With cars clocking in at an average weight of 4,000 lbs, when one hits a cyclist, it’s clear who’s going to win. And if you open a car door or swerve in front of us, you might as well be a brick wall. We don’t stand a chance.

On September 24, Tom Hollowell was killed as he rode his bike to work when a driver sped through a red light and hit him. I never knew Tom, but I took it personally. That could have been me. That could still be me someday. I got angry. I fumed about cars and reckless drivers for days after, about how they’re mowing down cyclists, about how they’re ruining the planet, about how we prioritize parking spaces over pedestrians.

Tom’s wife, Carol Regier, recently spoke before a memorial ride for Tom. There wasn’t an ounce of anger in her voice. She smiled as she told us about how Tom rode his bike every day and how much he loved it, about how much he cared for safe streets and a clean environment. I realized that instead of getting angry, we need to follow the examples of Tom and Carol. We need to make sure we never have to have another memorial ride ever again, and we need to change our car-centric lifestyles before the planet is past the point of no return.

I still have that slip of paper I found all those years ago. It’s in a frame hanging above my couch. When I got home after Tom’s memorial, it took on a new meaning. As tragic as Tom’s death was, I’m not going to despair. I have hope and a few simple pleas:

To our city officials: Invest in us. Give us safer roads and better infrastructure. You can do so much with smart planning, good policy, and a little bit of concrete and paint. Get to work.

To the drivers we share the roads with: Pay attention, slow down, and give us some room. It might take you a few more minutes to get to where you’re going, but I promise you, you’ll make it there just fine. And if you haven’t already, give biking in the city a try. You might like it.

To my fellow cyclists: Stop yelling and start writing. Write to your mayor, your councilmember, and your ANC representative and demand that they do something. Or donate to WABA or one of those countless environmental organizations out there to support the amazing work that they do. But most of all, keep on riding and don’t be intimidated. We need every last one of you.”