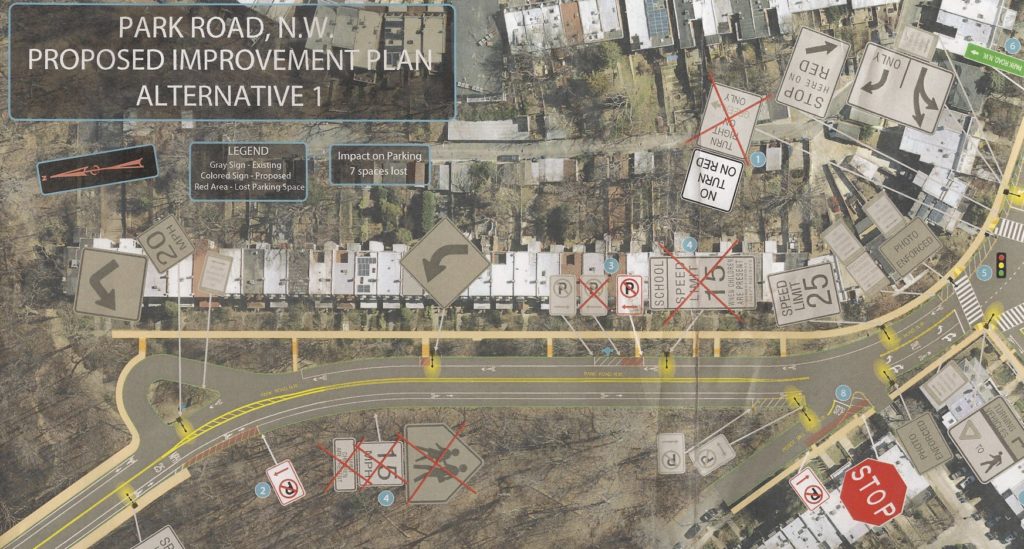 detail from documents DDOT handed out at the meeting

Advisory Neighborhood Commission (ANC) 1D/Mount Pleasant voted to endorse a plan to repave and restripe a section of Park Road NW, from the bridge over Piney Branch Road in Rock Creek Park to just past the intersection with Walbridge Place. The plan, as presented at the September 25 ANC meeting by a representative of the District Department of Transportation (DDOT), would eliminate several on-street parking spaces in the neighborhood, which brought some local residents to the meeting to object.

The ANC’s resolution to urge DDOT to proceed with the plan includes a suggestion to refrain from putting a “Stop” sign and a “No parking” sign at the corner of Park Road and Pierce Mill Road, which would create a new 40-foot long area (about 2-3 car lengths) where parking would be unambiguously not allowed. Apparently, parking occurs there now, but Emily Dalphy, DDOT Transportation Engineer, said that parking in this area might already be “technically illegal”.

The ANC’s resolution said that the elimination of these parking spaces “is not warranted by any significant safety concerns, because this [meaning, Pierce Mill Road] is a short
dead-end street.” The resolution also said: “The proposed changes would cost residents several much-needed parking spaces, for no discernible safety benefit.”

Other current parking spaces on this section of Park Road may be marked with “No Parking” signs as well, with a possible total of ten lost parking spaces.

The proposed changes would also eliminate a bike lane on the downhill (toward Rock Creek Park) side of Park Road, but preserve the bike lane on the uphill side. The rationale given by Dalphy was that, when going downhill, bicyclists are capable of reaching the posted speed limit of 25 miles per hour – the speed that law-abiding drivers are also going. 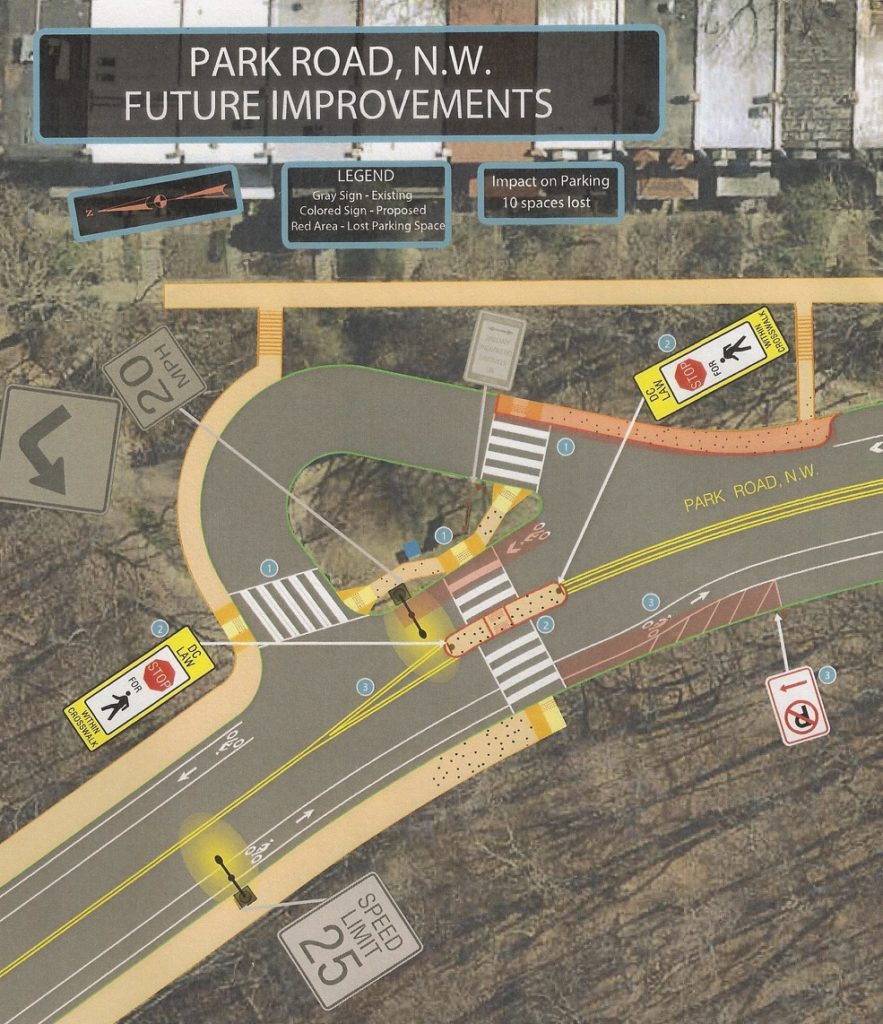 photo cred detail from documents DDOT handed out at the meeting

Dangers caused by speeding along this stretch of road is a serious concern. Opinions on how to deal with it differed. The proposal will install a crosswalk with a raised center median. It will be located where drivers head into Mount Pleasant from Rock Creek Park (see detail from DDOT handout) and marked with “Stop for Pedestrians in Crosswalk” signs. A new painted center median, with a pair of double yellow lines three feet apart, will extend from the pedestrian crosswalk to the intersection with Pierce Mill Road. Dalphy said that measures like this have been studied and shown to be effective at reducing speed.

Because this road is classified as a “minor arterial”, it is ineligible for traffic-calming “verticals” – i.e., speed bumps, raised center medians.

The project is in the district of Commissioner Jack McKay (district 03). McKay wrote a resolution recommending that the proposed three-foot-wide center median be eliminated, and the freed-up space be used to create a pedestrian space next to the remaining parking, so people can get out of their vehicles in relative safety. After all debate and questions had concluded, ANC1D chair Jon Stewart (district 01) made a motion to strike this recommendation from resolution. Stewart’s motion passed, four to one. McKay was the sole vote against.

Earlier in the meeting, a community member suggested that the project include a sign that asked people to drive safely. Commissioner McKay answered that the sign should say “Welcome to Mount Pleasant – Slow the Hell Down”.

Next
Your Afternoon Animal Fix – AdoPtville