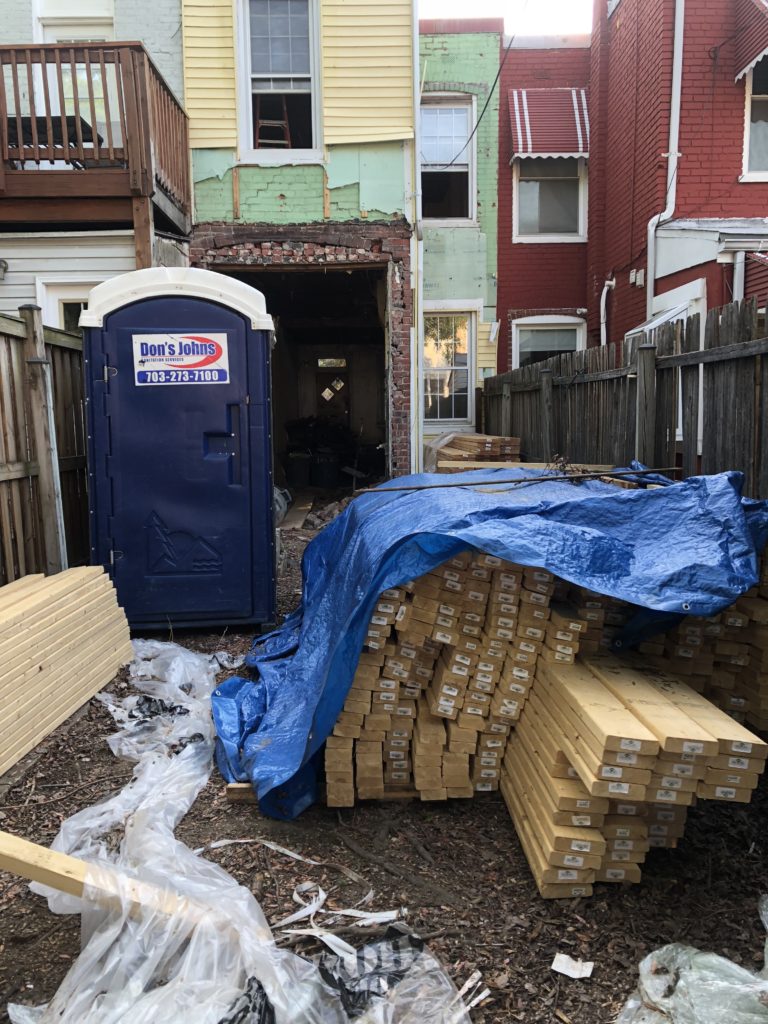 I am the neighbor of a house that has been issued 2 stop work orders. The house was bought by Dilan Investments in April 2018 from the estate of the previous owner. Over the course of a few days, Dilan gutted the house down to a dirt subfloor, which included demolishing the back exterior wall, all first floor joists, half of the second floor joists, all interior walls, and the staircase. Only postcard permits for non load bearing/ non structural work had been approved at this point. On April 25, stop work order was issued by DCRA for exceeding the scope of the permits and failure to notify neighbors as required by DC Code when the work affects adjoining properties (removing all the joists affects party walls and foundations). 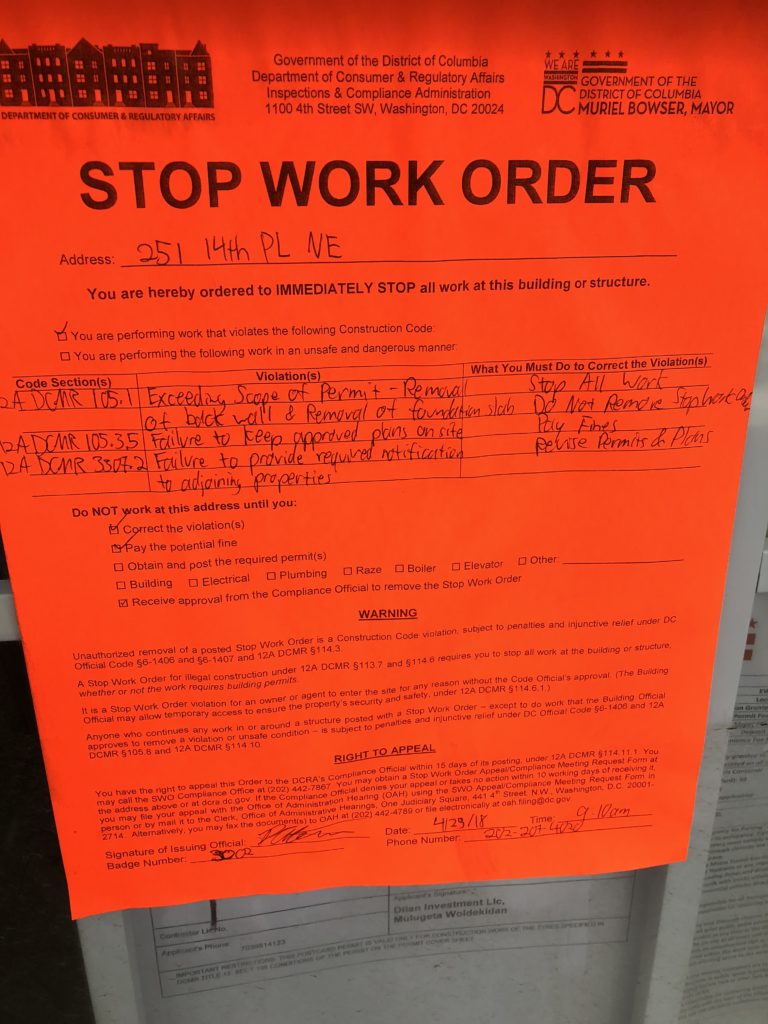 Since April 25, DCRA has not required Dilan to secure the unsupported party walls nor required them to place a barrier to cover the exterior of the home which is open to the elements and rodents. Both of these actions are required by DC Code. 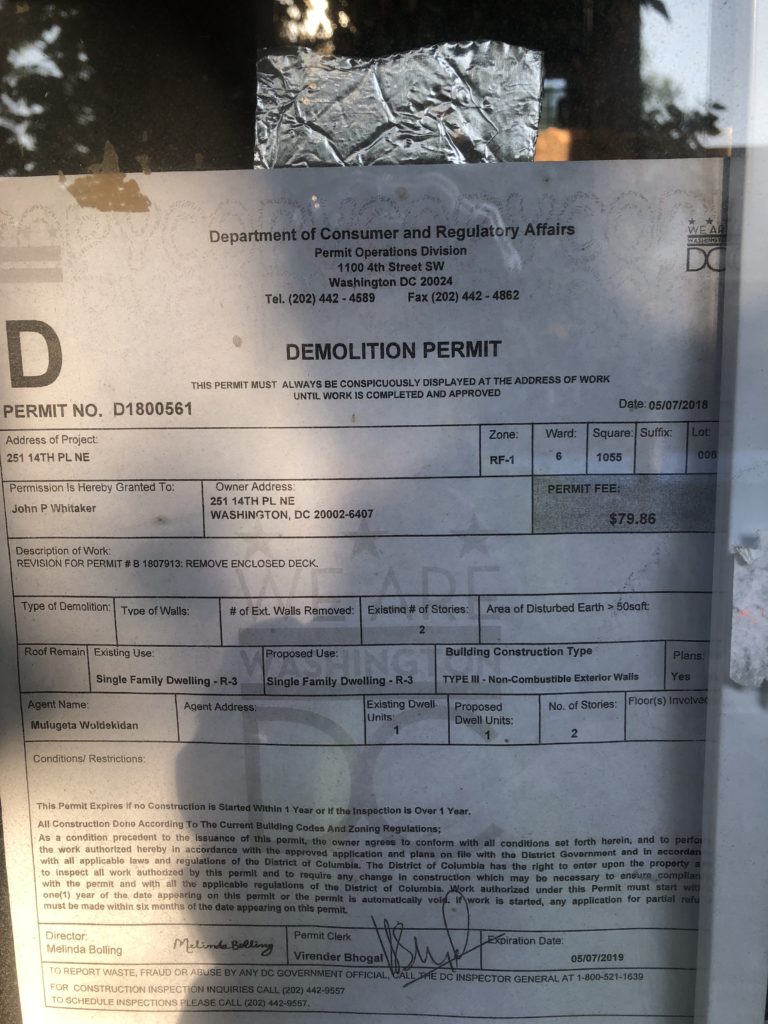 On May 10, I received a neighbor notification letter for removal of the back porch but it didn’t address any of the interior structural work nor include the construction plans, as is required by Code. If I fail to sign a response form within 30 days of a neighbor notification, the letter and construction plans are considered uncontested and it could allow Dilan to access my home to perform work on the party walls or foundation. DCRA still hasn’t responded to my objections that the notification is incomplete as I cannot consider information that I never received. Following my objections to the neighbor notification, Dilan began communicating through its attorney.

According to Dilan’s website, it does over $30 million in development each year in DC and claims that it never has complaints. However, its contractors have stood on my garage roof to cut their tree, called me a racist for objecting to construction activities before 7am, and talked to the police about filing harassment complaints against the neighbors. So far I have found at a stop work order against another Dilan property for similar reasons.

Today contractors accessed the house and I called the police (per DCRA’s advice). The contractors told the police that a neighbor (actually not me) complained that the back fence is unsecured and that Dilan’s owner told them to secure it. The police responded that the contractors were allowed to do this work and left. The last time I called the police they did not even get out of the squad car. There’s a person here right now with blueprints, wearing a polo and khakis-so clearly not here to fix the back fence. According to DCRA, the stop work order means zero access to the house until it is lifted. But what’s the point of calling the police if they won’t enforce the order and I become the pain in the ass neighbor?

Ultimately, DCRA will not enforce its own Code nor respond to my requests for updates despite stating that someone would contact me on May 10. I have already had cracks in my plaster walls and ceilings and the party walls have been unsupported for at least 3 weeks. I have been working with Councilman Allen (big thanks to him and his office) and DCRA but to no avail. I’ve also posted on a neighborhood listserv and introduced myself to my immediate neighbors and informed them of the situation. I don’t know what else do to to ensure that my home is protected.”

Read more →
More Stories
Your Afternoon Animal Fix; Also Humane Society needs towels or bedding!“Do you or any one you know have a solid bike that you’d be willing to donate to him?”