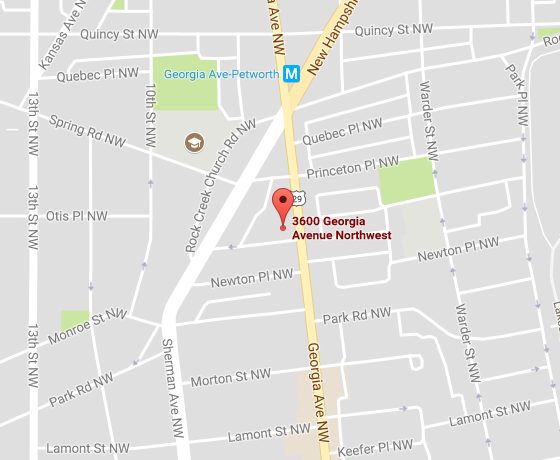 Woke up to gun shots at 155am followed by a heavy police presence near Otis Place and Georgia ave nw.”

“At 1:40 this morning an adult male victim was inside of La Morenita at 3539 block of Georgia Ave. NW. The victim went outside to smoke and asked the suspect for a cigarette. The male suspect produced a handgun from his waistband and struck the victim in the face with the gun. The victim fled on foot and flagged down police a short time later. As a result of the assault the victim was transported to the hospital for a minor injury to his nose.

The lookout for the suspect is a Hispanic male 30-35 years old, 5’6″ wearing a blue jacket.

Ed. Note: On Monday there was also an awful incident inside La Morenita.

“On Sunday, around 2:00 am, MPD officers responded to the sounds of gun shots in the 3600 block of Georgia Avenue, NW. During a canvass of the area, the officers located an adult male that was suffering from gunshot wounds in the 1000 block of Spring Road, NW. The victim was transported to an area hospital where he succumbed to his injuries.

Ed. Note: When MPD was asked by a resident if these two incidents were related they replied:

“There is a probability however we don’t have enough information at this time. The cases are under investigation by detectives. We are working with ABRA to review the licensing of the establishment.

Full MPD report after the jump.

“Detectives from the Metropolitan Police Department’s Homicide Branch are investigating a fatal shooting that occurred in the 1000 block of Spring Road, Northwest, on Sunday, November 19, 2017.

At approximately 2:01 am, members of the Fourth District responded to the listed location for the report of an unconscious person. Upon arrival, officers located an unconscious adult male suffering from multiple gunshot wounds. DC Fire and EMS transported the victim to an area hospital for treatment. All life-saving efforts failed and the victim was pronounced dead.

The decedent has been identified as 25-year-old Christian Isaac Lopez Ramirez, of Northwest, DC.

more stories
Previous
2 Suspects Caught after man shot at 18th and M St, NW around 2am Sunday
Next
MPD Seeking Suspect from Assault Friday Night at 11th and Kenyon St, NW “The suspect brandished two knives and then lunged at the victim”