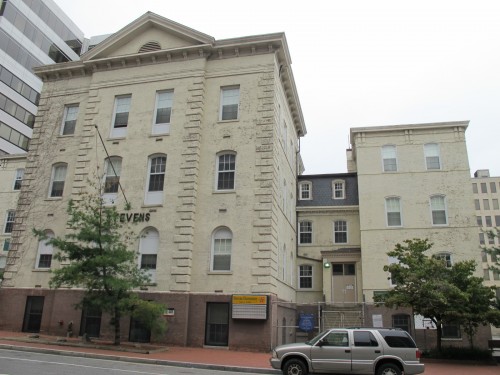 “We know that, starting at a very young age, every day counts when it comes to setting young people up for success. By reopening Thaddeus Stevens, we will be able to provide more child care options for DC families while expanding access to one of our most sought after elementary and middle schools,” said Mayor Bowser. “My Administration is all in for kids and families, and whether they’re toddlers or teens, we want all our young people to have access to the care and educational opportunities that will help them succeed in school and in life.”

Earlier this year, as part of her commitment to increasing access to high-quality child care in Washington, DC, Mayor Bowser announced that her Administration would make space available for child care providers in three government-owned buildings. Additionally, Mayor Bowser proposed $15.3 million in the Fiscal Year 2018 budget for the creation of 1,300 infant and toddler seats over the next three years, and the Council instead included $11 million for nearly 1,000 seats.

“Throughout the District of Columbia, we see a growing demand not only for pre-K-12 seats, but also for infant and toddler care,” said Deputy Mayor Niles. “We know every day counts in early childhood development, so I’m thrilled we will be able to make a portion of this historic building available to provide more seats for infant and toddler care.”

School Without Walls at Francis-Stevens, located in Ward 2, is a rigorous, high-performing school that attracts families from across Washington, DC. During the 2016-2017 school year, the school served 471 students in PK3 through eighth grade, and had more than 900 students on its waitlist.

“We want every student to have rigorous and joyful experiences in school in every neighborhood in DC,” said Chancellor Wilson. “Expanding School Without Walls at Francis-Stevens into Stevens Elementary School is one step in building programs across the city to meet family and community demand.”

“Much as the original Stevens School represented a pioneering achievement for African-Americans looking to build a better life for their children, we believe that the uses outlined for the ‘new’ Stevens will make quality educational opportunities available to more students from all eight wards – including, uniquely, infants and toddlers. This reflects the best of the Stevens tradition,” said Advisory Neighborhood Commissioner Patrick Kennedy (ANC 2A01). “Although the process of finding a use for Stevens over the last ten years has not been easy, we thank Mayor Bowser and Deputy Mayor Niles for their vision in making the most of this unique asset – not only for the West End and Foggy Bottom, but for all those who are invested in quality public education in the District of Columbia.”

“Our community had high hopes for School Without Walls at Francis-Stevens. Those hopes have been met and exceeded, with an ungraded curriculum, academic progress, an active and engaged HSA, and a huge waiting list for all eight wards. The Francis campus is operating at full capacity, and there is a clear need for more space to accommodate more students. The Stevens campus will help fill that need,” said Advisory Neighborhood Commissioner Mike Silverstein (ANC 2B06). “Sincere thanks to Mayor Bowser and Deputy Mayor Niles for their leadership and vision, and congratulations to all involved.”

The Thaddeus Stevens Elementary School is located at 1050 21st Street, NW. Built in 1868 as one of Washington, DC’s first publicly-funded schools for African-American children, the school was closed in 2008. The school was named in honor of Thaddeus Stevens, a Pennsylvania congressman and prominent abolitionist who championed free schools for all.

The Deputy Mayor for Planning and Economic Development, the Deputy Mayor for Education, the DC Department of General Services, and DC Public Schools will oversee the renovation of the historic site. The project will be completed by the development team of Akridge and Argos Group.”