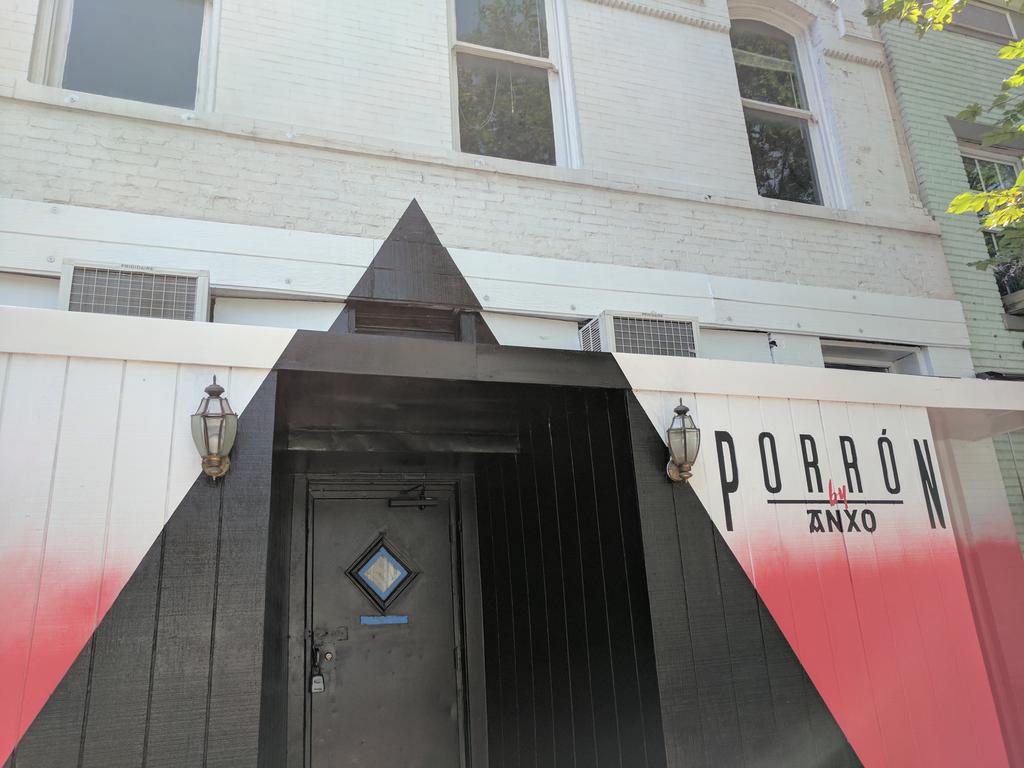 I remember when a time when nobody knew how to pronounce ANXO.

“The team behind ANXO Cidery & Pintxos Bar in Truxton Circle and the recently opened ANXO Cidery & Tasting Room in Brightwood Park makes its summer home on Barracks Row for an exciting pop-up: Porrón by ANXO! This concept is dedicated to our favorite way of drinking cider: from height, in abundance, and outdoors.

The 70-person space, designed by local DC artists No Kings Collective, emulates a summer day indoors with turf flooring and bright blue skies covering the ceiling and walls. Guests can enjoy porrónes of ciders or cocktails along the 18- seat bar, or on lawn and patio seating provided by No Kings.

THE DRINKS – Porrónes are not new to ANXO, as they are available during brunch at the Truxton Circle restaurant and all day long at the Brightwood Park Cidery. Porrónes will be filled with shandy-style concoctions such as the Clara (Mahou Cinco Estrellas, San Pellegrino Limonata), Rosé-Colored Glasses (Snowdrift Red, AXTA Blanco Vermouth, Blood Orange Bitters), or the Hill of Strangers (ANXO Sidra Natural, Green Hat Spring & Summer Gin, Grenadine). Guests will also enjoy house ciders including Transcontinental, the newest ANXO collaboration made with Snowdrift Cider Co. in Washington State. A Selection of Beer and Wine will also be available

THE FOOD – Grilling rules at Porrón. Throughout the duration of the pop up, Executive Chef Alex Vallcorba will offer wood-fired grilled meats and vegetables prepared in Basque and Catalan traditions on Fridays and Saturdays. A series of grill-centric pop-ups by local chefs and upcoming restaurants will begin later this summer. Always available will be the Kennedy Street Cidery food menu featuring meats, cheeses, salads and paninos.

OPENING WEEKEND – To kick off Porrón by ANXO’s opening weekend, guests are invited to a Sneak Peek of the space on June 30th or July 1st. This ticketed event includes a wood-fire grilled feast of ribeye, sardines, green onions, pan con tomate, and unlimited porrónes. Each ticket is $65 and includes tax and gratuity. Tickets can be found at anxodc.com/porron. This event is 21+.”

more stories
Previous
“Jeffrey Gildenhorn – man of the people We are deeply saddened by the loss of our friend.”
Next
Better than the Toilet