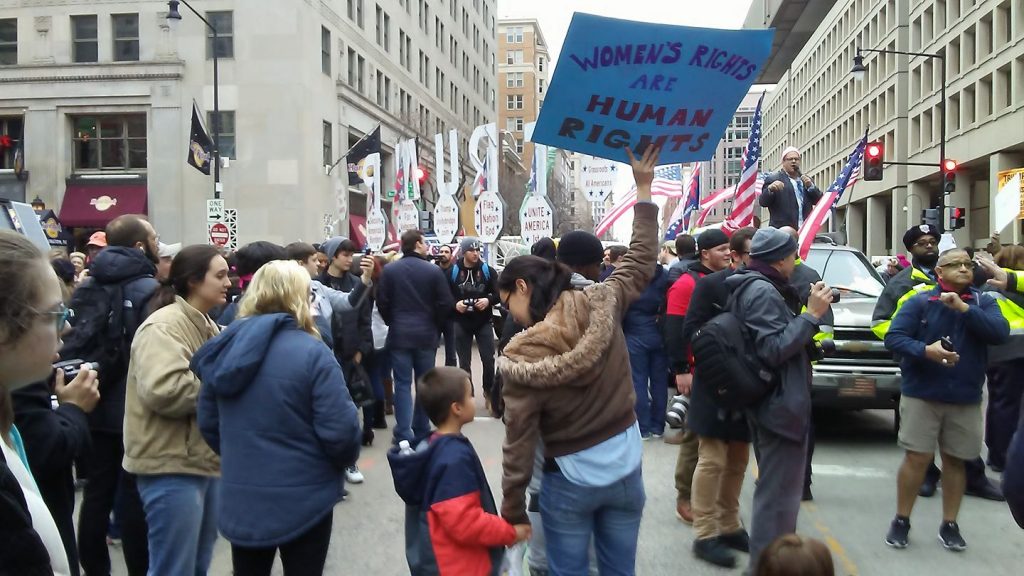 Thanks to all who wrote in about the notorious Trump Truck/unity bridge/trump-mobile:

“The “Trump Truck” is driving around downtown despite being surrounded by anti-Trump protestors. It was briefly stopped at 10th and E sometime after 3pm when three or four people lay down in front of it. There was some yelling back and forth before the police got the people laying down to stand up and the truck could move on.

While we were all seeing what would happen, a woman silently stood in front of the truck holding a poster saying “Women’s Rights Are Human Rights” while holding her child’s hand. It was an amazing moment (photo above.)”

“Their dream to create “unity, and help unite our country together” didn’t seem to be doing so well Saturday at 14th and F Street. For some reason, the hundreds of thousands of people marching against Trump’s hate and ignorance didn’t take kindly to the sight of the Unity Bridge. Credit the DC police with preventing the Bridge from being washed away.”

“I live between 9th and 10th on E, and this photo and video I took from my balcony around 3:15. The Trump mobile trying to turn, being blocked by March attendees. No comment on his intentions for coming downtown today, but the video shows he was saying “we all need peace, we all need to be heard” etc. I’m sad for all of us at this point.”

Read more →
More Stories
The Best Signs from the Women’s March in DC Vol. TwoVidalia’s Replacement, Honeysuckle, Nearly Ready to Roll – Check Out the Menu and a Peek Inside