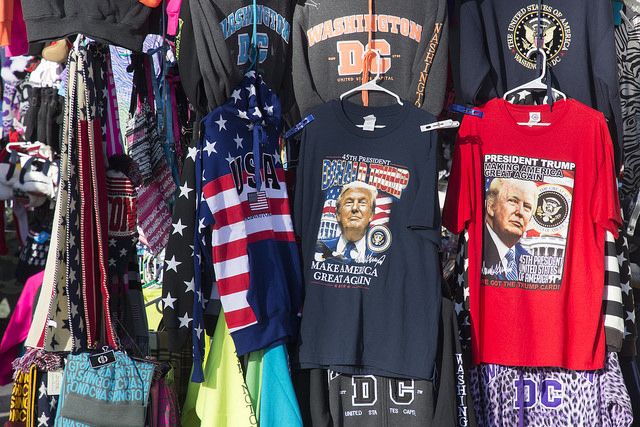 Ed. Note: Please also remember to advise any visitors you are hosting that proper metro riding etiquette requires the passenger to stand on the right or walk on the left side of escalators.

“As tens of thousands of visitors arrive for the 58th Presidential Inauguration, Metro has some important safety and travel tips for those planning to use the rail system.

On Inauguration Day, Metro stations, platforms and trains may be extremely crowded. Some escalators will be intentionally turned off by police to “meter” the flow of passengers. Please use caution when traveling through crowded areas.

On the platform, stand back from the edge until the train comes to a complete stop and the doors open. Take note of the flashing lights on the floor that indicate a train is approaching, and make sure you are behind the “bumpy tile” safety strip. Hold children by the hand.

Never jump down onto the tracks for any reason. Metro tracks are electrified and trains run frequently. If you drop something on the tracks, see a Metro station manager or Transit Police officer for assistance.

Do not run in stations, on escalators or platforms. The next train is just minutes away.

Do not hold the train doors. They do not work like elevator doors and will not reopen automatically. When you hear the chimes indicating the doors are closing, step back and wait for the next train.

Aboard the train, move away from the doors to make room for those behind you. Do not lean on the doors.

On escalators, take small children by the hand. Stand on the right side. Do not bring strollers on escalators; use elevators instead. When you reach the top or bottom of an escalator, keep moving so that customers behind you have room to exit.

In the Metro system, smoking, eating and drinking are prohibited. Bicycles and coolers are not permitted aboard trains on Inauguration Day. Also, take note of items that are prohibited at Inauguration events, including weapons of any kind, laser pointers, glass, selfie sticks, drones, large backpacks or sticks.

Immediately report any unattended items or suspicious activity. Call Transit Police at (202) 962-2121 or send a text to “MyMTPD” (696873).
Metro Transit Police continuously patrol stations and trains, both in uniform and in plain clothes.
Please note that items carried onto the Metro system may be subject to random security screening by uniformed Transit Police officers.
Tampering with or disabling Metro equipment, such as escalators, elevators, train doors or emergency equipment, is unlawful and may result in arrest.
In the event of an emergency, intercoms are located on station platforms and aboard trains. Follow the direction of police officers and Metro personnel, and listen for public address announcements.

Buy your SmarTrip card in advance to avoid lines on Inauguration Day. Each rider age 5 and up needs his or her own card. You can buy SmarTrip cards at any Metro station, as well as CVS/Pharmacy or Giant stores. Be sure the card is loaded with enough value to pay for all trips you plan to take during the day.
Remember where your trip started. Many visitors who are dropped off at Metro get on a train without taking note of the station name where they boarded.
Spread out along the platform. Rail cars in the middle of the train are the most crowded. Try boarding all the way at the front or back of the train. Note that an 8-car train will occupy the entire length of the station platform.
Plan your trip to Inauguration events without transferring between lines. There is a Metro station near the National Mall on each of Metro’s six rail lines.
As a reminder, on Inauguration Day, Metro will open at 4 a.m. and close at midnight. Five Metrorail stations will be closed on Inauguration Day: Pentagon, Smithsonian, Federal Triangle, Archives and Mt Vernon Square.
Sign up for Metro Inauguration Alerts by texting “POTUS” to 90360. Visit wmata.com/inauguration for additional information and maps.”

Read more →
More Stories
BREAKING: “there has been a revision to the “no umbrella” policy for tomorrow’s inaugural events.”“Can you commit to coming out and getting this pile of trash cleaned up and citing this and very illegally and unsafely kept rental property via DCRA?”