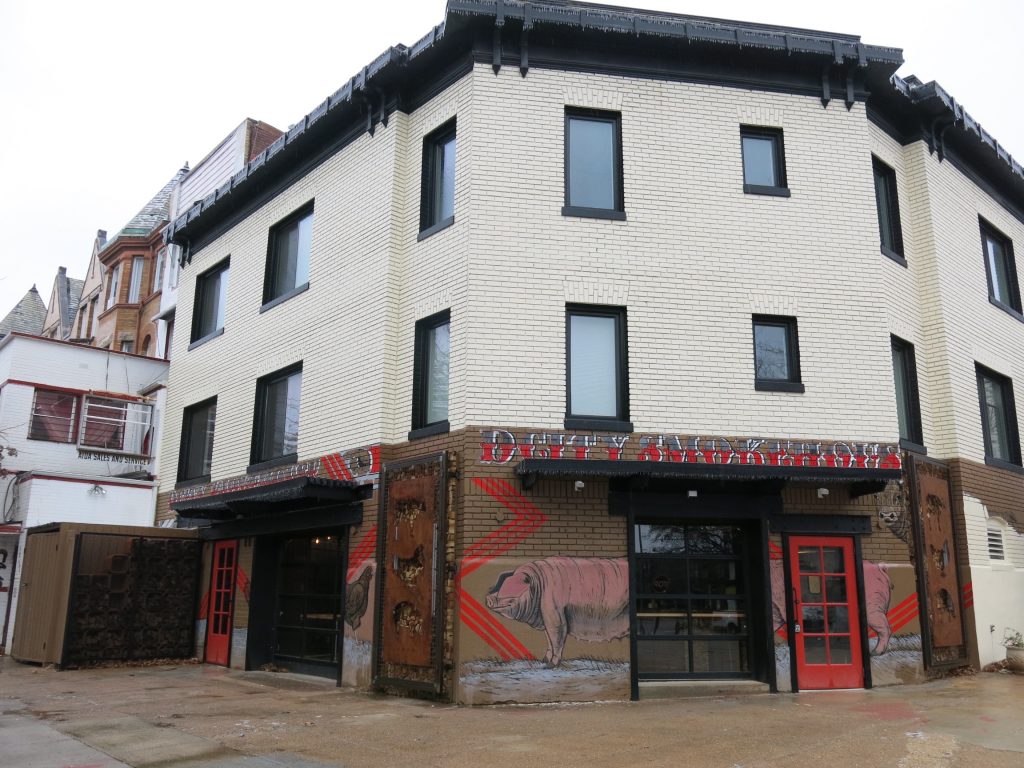 “Co-owners Scott Jacobs, Melvin Hines and the Southeast Restaurant Group (SERG) are fired up and ready to announce January 4th as opening of the all new DCity Smokehouse location.

Located at 203 Florida Ave NW, the popular eatery will once again offer the best in barbecue, but at in even greater capacity than before. While the last location (8 Florida Ave NW, which closed in December 2015) was mostly a carry-out spot with just a few counter seats, the new restaurant boasts a full bar and seating for 35 inside. Better yet, the seating will more than double when spring comes as the patio opens with seating for 45.

Restaurant-goers will be happy to find the same menu items that first made DCity Smokehouse such a hit when it originally opened in 2013. The menu will include staple sandwiches such as the Meaty Palmer (turkey, pork belly, avocado, tomato, chipotle aioli at $10), the Brisket Champ (sliced smoked brisket, pickles, crispy onions, house bbq sauce at $10), the DCity Halfsmoke (half smoke sausage, brisket chill, nacho cheese, yellow mustard) and more, see the full menu below. The menu will also see the return of platters but this time, around instead of the option of just one side, platters now come with two or more sides. Some standouts include the Showstopper (rib tips, brisket, smoked wings, and three sides at $30), and the Ribs and Wings Combo (spare ribs, pit smoked wings and two sides at $15). Meat will be smoked daily in two J & R smokers, one using hickory and cherry wood to smoke the pork and poultry and the other will handle the ribs, brisket and pork with the help of mild white and red oak woods. 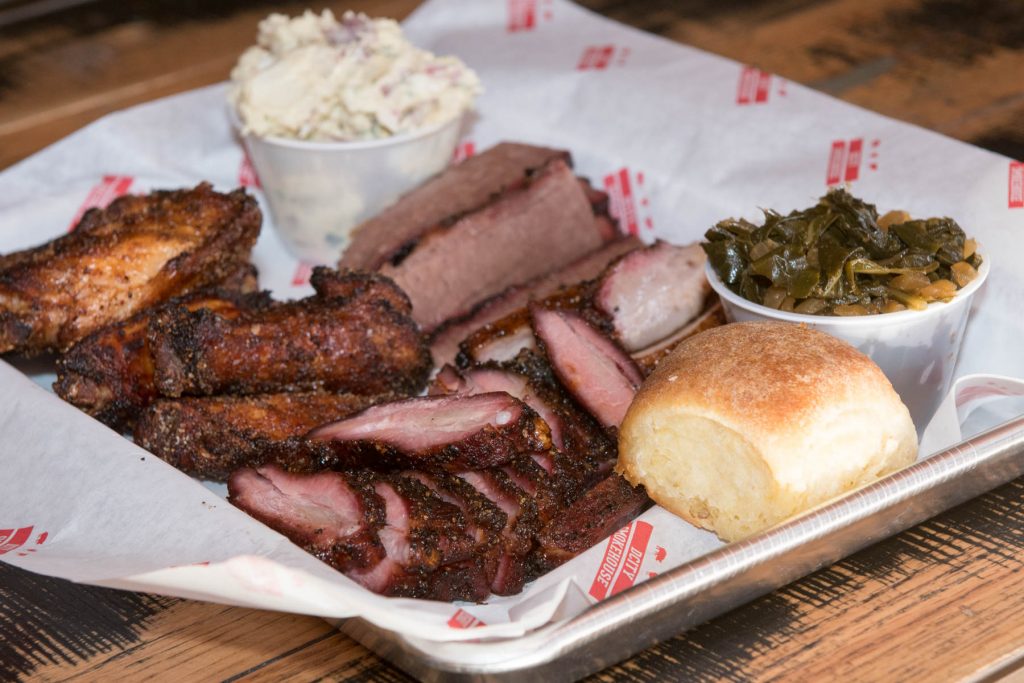 While DCity will mostly focus on it’s tried and true staples, the menu will also see a couple additions like the Mac and Jack Cheese ($3/$6). As one of the biggest selling points, DCity is going above and beyond the call of a standard smokehouse with in-house baking. The bread, a cross between a milk bun and a yeast roll, will serve as the perfect complement to the meats.

Continues with full menu after the jump.

Inside the restaurant, hungry fans can choose to visit the carry-out counter (calling ahead is recommended) or take a seat inside where the space is packed with rich earthy elements like wood logs, stainless steel, a great outside view by way of two garage doors and even a touch of DC art by mural artist Sofale. DCity Smokehouse will also be the place to visit for big events with a widescreen TV projector. While the team urges everyone to come in and get the full experience, delivery service will also be available through Uber Eats and GrubHub.

What’s to drink?
Just like the food menu, the bar program will be simple and to the point and with some local influence. Behind the bar will be 12 beer taps, including some from local breweries like DC Brau, 3 Stars and Right Proper. For cocktails the list will include a couple of standards like an Old Fashioned and a few originals but only what complements the barbecue. Local spirits will hail from One Eight Distillery, Civic Vodka and Cotton Reed. The bar will serve a few bottles from ANXO Cidery.

Shawn McWhirter who has been with the company since day will be running the kitchen, and more importantly the smokers as Pitmaster, and borrowing from SERG’s sister company, Wicked Bloom, Andrew Choi will serve as the general manager and Lance Smith will be keep the drinks flowing as the bar director.

Further behind the scenes are the SERG co-owners Melvin Hines and Scott Jacobs, as part of SERG which is also the force behind Wicked Bloom DC Social Club and Revive Events and Catering.

11am-Midnight, with later hours for delivery” 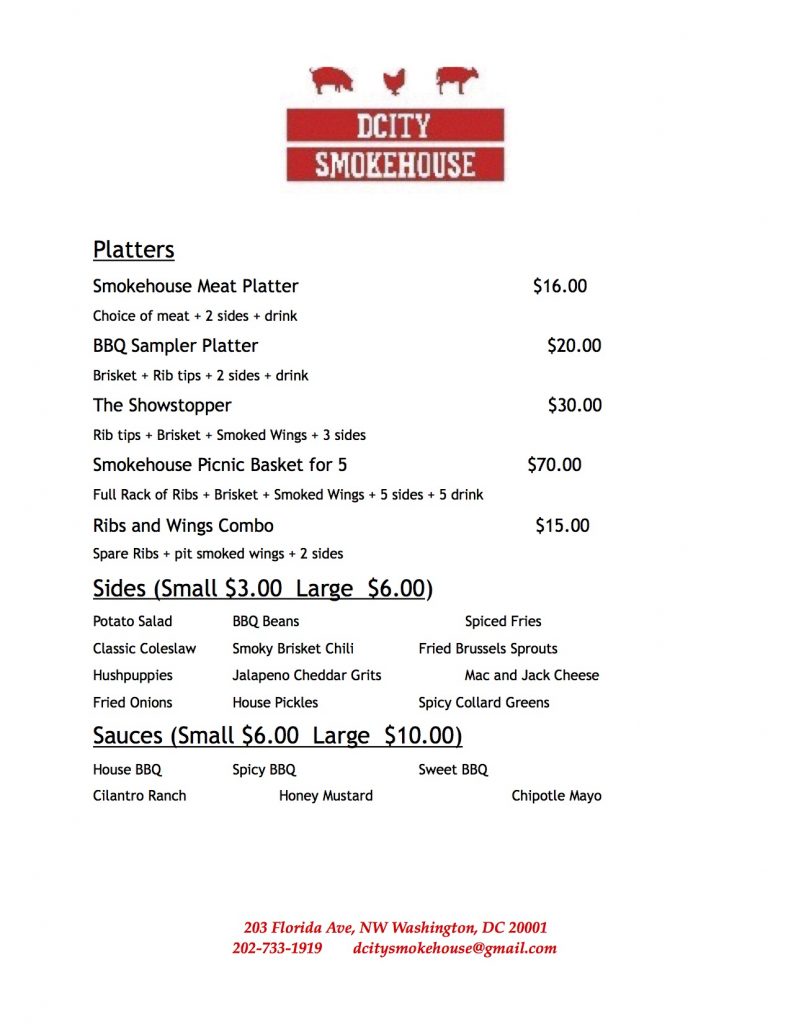 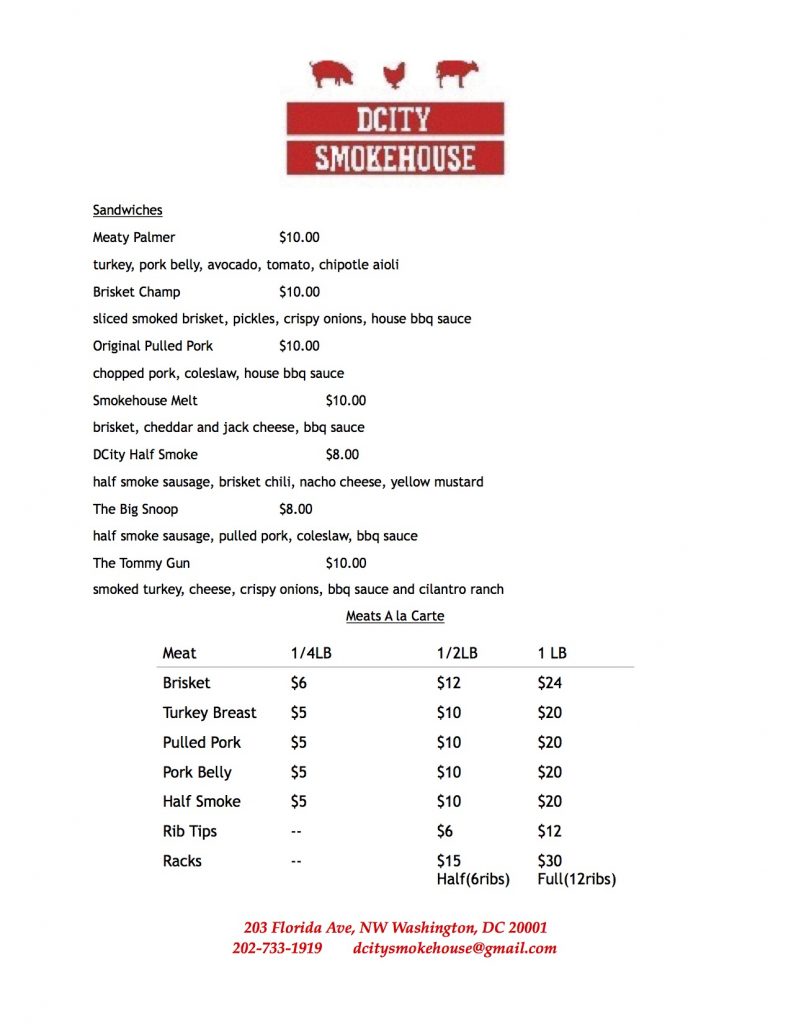