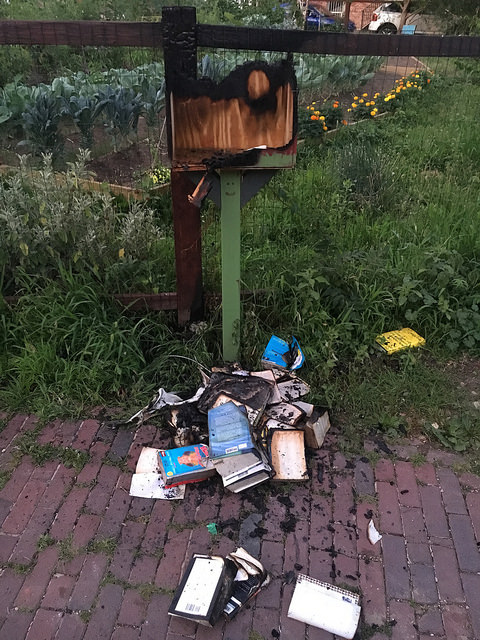 There’s been some terrible shit happening these last few weeks, and though it’s no secret I love Little Free Libraries, I realize this is not on par with the other awfulness we’ve seen but we can’t deny there are serious issues unresolved. Serious issues. A reader reports:

“Little free library set on fire right next to the North Columbia Heights Community Garden in the alley between Park, Sherman, Lamont, and 11th.”

Update from another reader:

“I reported the arson to the MPD this morning. Two very nice officers came and informally looked at the damage. However, they didn’t take a formal report because I don’t own/run the Little Free Library. They said they would take a formal report from whomever owns/runs the library. I’m not sure who that would be. Maybe a PoPville reader knows?”

“Another follow-up: I want to commend the MPD and the six officers that came by and investigated the burnt library this evening. One of the officers also took statements from me and one of my neighbors. They’re trying to contact the community organizations in charge of the Little Free Libraries.”