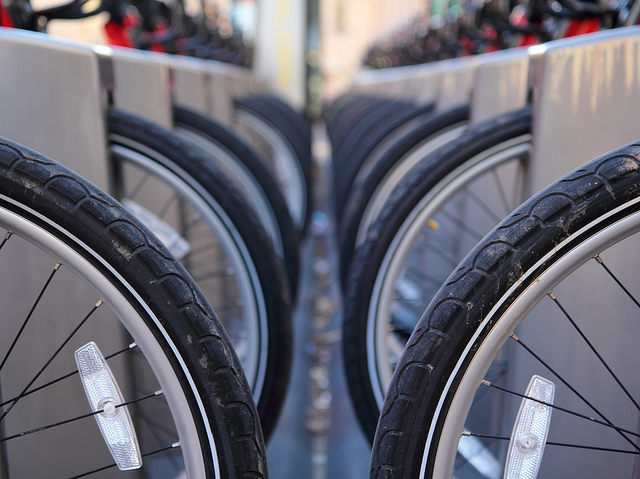 “Motivate, the operators of the Washington, DC region’s popular Capital Bikeshare program, announced today it will be significantly expanding its weekday morning bike corral service in downtown Washington, DC in an effort to meet the increasing demand for places to park or “dock” during peak usage hours. The three current Capital Bikeshare corrals are located at 21st and I Street NW, 17th and K Street NW/Farragut Square, and 13th and New York Ave NW. The three new Capital Bikeshare corrals will be located at 20th and Virginia Ave NW, 5th and F Street NW and Maryland and Independence Ave SW. All corrals will be open on weekday mornings (federal holidays excluded) from 8am to 12pm until late Fall.

According to Eric Gilliland, the General Manager of Capital Bikeshare, the expansion of corrals will provide much needed station capacity at a crucial time of day. “This time of year is always busy, and the growing popularity of Capital Bikeshare is placing ever greater demands on our operations,” Gilliland said. “At the same time, Metro’s Safe Track program seems to be contributing to even higher ridership than usual as people turn to Capital Bikeshare as an alternative transit mode.”

Based on Capital Bikeshare ridership numbers, weekday ridership has increased by an average of 1,700 trips per day from the month prior to the start of Safe Track. There were also over 50,000 more trips made in June of 2016 than the same month last year. The three current bike share corrals are also parking an average over 260 bikes per day, greatly improving the ability of downtown stations to absorb more riders than the number of stations would typically allow. “By expanding the number of corrals downtown, we really are increasing the size of the system without adding more stations. In doing so our goal is to provide better service to our members and make Capital Bikeshare an even more attractive transportation choice,” Gilliland said.”