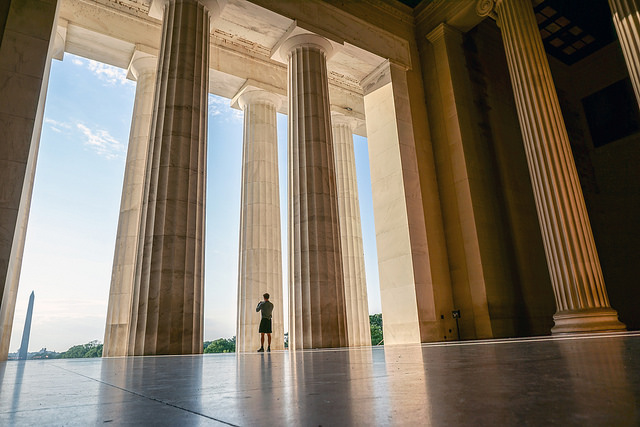 I like to jog on the Mall in the morning and have done so for years. Lately, a pair of women there have fixated on me as a “criminal” who is following them. This started 6-8 weeks ago. They dress all in black, including sunglasses, hats, and black winter earcovers no matter the weather, and carry black garbage bags. I have never spoken to them, have no idea who they are. I wandered too close to them, I guess, and they both pointed at me and scream-chanted in unison “Criminal! See something, say something, criminal! Never come near us again!” over and over and over. I was weirded out and a little scared (“Invasion of the Body Snatchers” scarred me as a kid) but I just ran away and chalked it up to life in the Big City.

Then, I started seeing them near-daily. Each time they point and scream and make a scene, sometimes from a good distance, and I always have to scramble to get out of their sight. I tried altering my routes and time I set off, and avoiding them when I see them, but they seem to live on the Mall and wander the area randomly, and I’ve found myself turning a corner and coming face-to-face with them. I thought they were doing that with everyone until I bumped into them in the middle of a big group of runners recently. They were fine with the crowd until they saw me, then they started point/chanting again, calling everyone’s attention to themselves and me. I realized this reaction was to me specifically. I’m guessing they have some kind of shared paranoia and after seeing me so regularly in various places they assume that I’m following them.

I don’t know what to do now. I doubt they’re doing anything illegal, just super-freaky. They clearly fear me and I want to be compassionate, but I’m getting a little anxious and paranoid myself worrying what happens if I accidentally come too close, or if they decide to proactively do something about the “criminal” following them. Speaking to them is impossible and trying would probably make things worse. The Mall is quite large and really the only running route near my home that I feel is safe and open, and I hate to feel driven away. Is that my only option? Should I try to talk to them, and if so, what should I say to convince them I’m just a normal person trying to get through a run? Thanks in advance for any advice.”