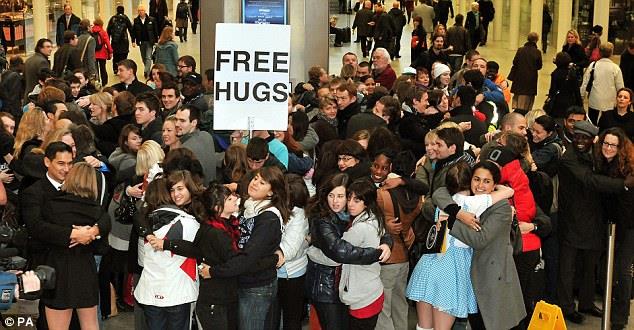 How about celebrating Valentines Day by spreading your love around the District and giving out some hugs. Join the DC Couchsurf community for this spotaneous love fest.

Once on the train, act natural, find a seat or find a place to stand safely. We want to appear as though we are regular passengers. When the train pulls away from the station casually turn to the “stranger” next to you and ask, “Hey, would you like a hug?!” This “stranger” will say, “Sure!” and you will both hug. All over the train, and in many of the cars, we will all be asking around to see if anyone would like a hug. (We will begin by asking those of us who got on the train with the group and are “in” on the plan). Keep asking all around the car you’re in. Over the next two stops, you can begin to ask bystanders on the train if they too would like hugs. Be sure to be polite even if they politely decline.

12:40ish: Exit the train at Smithsonian.

12:45ish: Head over to the National Mall to meet up with Couchsurfers who will be giving out free hugs on the mall.

This isn’t required, but we’re encouraging everyone to wear something red. Whether it be a red scarf, hat, head band, bandana, coat, shirt… whatever it might be. Oviously, this won’t be the primary identifier to who is in our group, since there could be a lot of red that day, but it’ll be a nice touch once by-standards realize we’re all part of a group.”