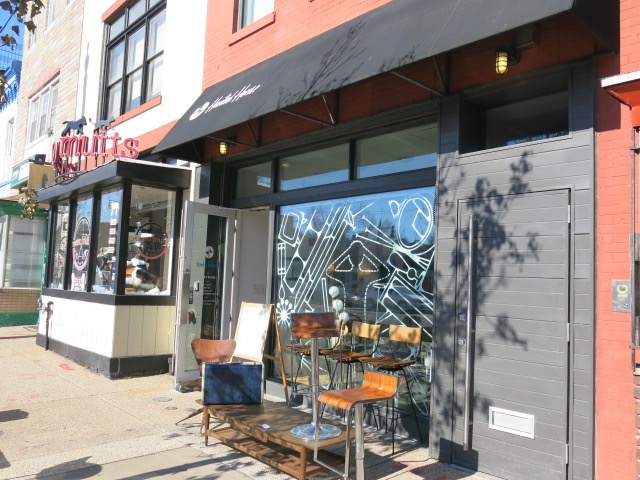 Over the past few months, there have been reports on the closing of four independent furniture stores. We’re now sharing news about the upcoming closing of Hunted House on H Street NE. It’s not simply another sad ballad — it’s just as much about a store and our retail sector shifting gears. We built ATTIC partly as a response to these types of changes. We’ve also just launched ATTIC Fashion, which seeks to make shopping from DC’s independent clothing boutiques, vintage shops, and DC area designers easier too. Ultimately, we’re concerned about a future where DC has little more than the same chains you can find in other cities. We hope you enjoy our reports and think about the city you want for the future too.

The following is an interview with Mark Johnson, owner and shopkeeper of Hunted House, a vintage store specializing in mid century modern furniture and home decor currently located on H Street NE.

Let’s start out with the big news. You’re going to close the Hunted House store on H Street at the end of February? Why?

Well, our four-year lease is up. The landlord is going to take over the space to meet their expansion needs. The Design Army firm owns the building, and they already use the two floors above the store.

So does that mean you are looking for a new space?

Another permanent brick and mortar space just doesn’t necessarily seem like “the way to go for stores [like ours]” right now. Instead, we’re excited about the idea of doing pop-ups. There’s no obligation, no long leases and no triple-net rents. Plus, it allows us to move around a bit and try out other parts of the city.

On a personal note, I won’t mind being a little less present. I’ve enjoyed running the store for the past ten years, but it’s a lot of work and there are some other things I’d like to spend some time doing. With a brick and mortar space I spend a lot of time trying to make sure we have four to six new pieces every week. I’ve had so much fun doing it, but it takes a lot of time and energy.

A Hunted House Pop-Up? Tell Us More. Anything Soon?

I’ve had conversations with a few folks, but I don’t have any particular location picked out right now. When the warmer months get a bit closer, we’ll see what feels right.

For those who have been in the city a few years, many probably got to know your store from its 14th Street location. But was that the start of the business?

I’ve been in the vintage furniture business for about 10 years. I started out as a personal collector, more interested in Victorian and Art Deco style furniture to fit the style of my house. I was working for DC government at the time, as a communications director to a city leader and had no intentions of running a business. Eventually I started selling on Craigslist in order to make room in my own house for furniture pieces I bought at auctions or estate sales.

As the holidays approached in 2006, I applied for and got accepted to rent a space at Eastern Market. After a few months there, my then business partner and I heard about the space on 14th Street. That became our first permanent location in early 2007.

That space on 14th Street was unique. It was a different than any of the others in the area at the time.

The space on 14th Street in the old, weathered building near T Street was really three separate apartments. We ran with it – conceiving the store as one unified living space. It was very intentional – we wanted shoppers to feel as if they were walking through someone’s apartment. I think it helped people envision the pieces in their own home. People told us it would have worked really well in New York, but as you said, seemed very different for DC.

The trick with that space was always balancing inventory. Because we wanted to maintain that real home feel, we couldn’t have too many sofas for example at any one time. We also focused on “mid-mod” [aka midcentury modern and MCM] in that space. That’s what people wanted the most and that’s where my passion and more limited knowledge was. I have learned so much more about the period over the decade and much of it from my customers.

So what motivated you to move to H Street in 2012?

Hunted House moved to H Street in its mid life because we were ready for something different. We had become much better known and we were growing! A street-level space was exactly what we needed. At that time, H Street was growing too and it was clear that 14th Street was losing day-time business to night-life seekers.

How were 14th and H Street locations different?

We tried to create a similar feeling in terms of separate living spaces in the brand new, gallery-like space on H but it was much more challenging. The space had its own benefits though – such as heat and air conditioning and most of all a street-level entrance and a rear loading space. Plus, parking for customers was much easier on H than on 14th after our next-door neighbor Room and Board opened.

The biggest difference between 14th and H Streets, however would have to be the volume [of foot traffic]. It was much, much lower on H Street, especially during our first two years. Not long ago 14th St was known as a hub of sorts for vintage shopping, with multiple shops – Ruff & Ready, Millennium [and Miss Pixies] – we might see 50 people in only 2 hours on a good weekend day and averaged 120-130 per day in general. We were lucky if we got anywhere near 50 people in an entire day on H Street for the first few years. That has improved in the last two years. Now we may get as many as 70-75 people per day. In 2-3 years, H Street might get comparable levels to what 14th Street once did.

So do you thinking moving from 14th to H Street was a mistake?

Did I lose anything by moving? Aside from the drop in traffic for the first couple of years, it’s not clear. 14th Street isn’t the same anymore. It’s much more of a night time street now. Several of the other stores are no longer there. It has ceased being a destination spot for vintage furniture. Our 14th St store was there in a nice transition point when the area had a unique vibe that fit our business. I don’t think it would be the same now [in terms of traffic] if we were still on 14th street. What 14th street had might happen on H St too, eventually.

Running the store seems to have given you an interesting perspective into change and development in DC.

One thing that is clear is that DC is nearly boundary-less at this point in terms of where our customer base lives and shops. I remember people saying that I probably wouldn’t see them anymore as we transitioned from 14th to H Street. A few years later though, more and more familiar faces started to appear. The same people who rented in Logan, then bought near H Street, NE.

I might explore some other new areas [for the pop-ups]. There’s a lot going on around Union Market, but I’m open to other non-northwest areas too. I know I’ll stay in the city, and not the suburbs.

So what do Hunted House fans have in store for the next month?

We’ll be closing at the end of February. I’ll be running more sales over the course of the month and our prices will go even lower. And unlike some stores that might not bring in new inventory, I’m still going to have some new pieces coming through.

Do you have some final words (for this era of Hunted House)?

It has been a fun business. I’m sure I will miss this beautiful space that we’re in even more so than 14th Street location. Every part has been fun, despite some challenges that go along with running a business like this. But I’m certain my relationship with the designers and pickers that I have worked with over the last few years will continue. I want to keep helping to satisfy the DMV’s midcentury modern craving!