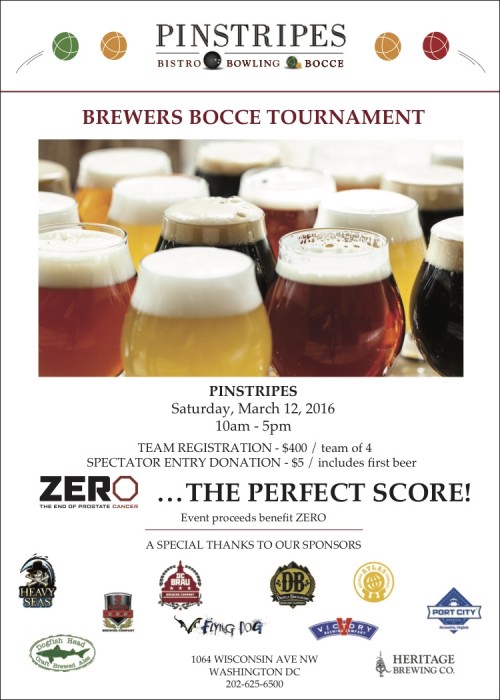 “On March 12th from 10am to 5pm, Pinstripes is partnering with ZERO, an Alexandria-based nonprofit aimed at ending prostate cancer, to host its first annual Brewers and Bocce Tournament. Together, more than ten local and national breweries will compete in teams to raise money and awareness for the cause (with all proceeds benefiting ZERO), including:

There are two ways you and your readers can get involved: grab three friends and form a team OR cheer on participants as you sip on $3 brews!

TEAM REGISTRATION: Limited team registration is available to participate in the all-day tournament. Teams consist primarily of breweries, but a few spots are open to the public for a chance to beat the brewer! $400 covers registration for 4 team members, plus lunch and brews to keep players hydrated! Team members may pay individually ($100 each) or as a team ($400).
SPECTATOR TICKET: $5 gets you in the door and covers your first beer! Sip on $3 brews donated by participating breweries and watch the best bocce competition in town, all while raising money to eradicate prostate cancer.

Read more →
More Stories
Anyone Else See this Trump Flyer in the Express Yesterday?WMATA: “announced plans to increase patrols onboard buses, trains and within Metrorail stations”