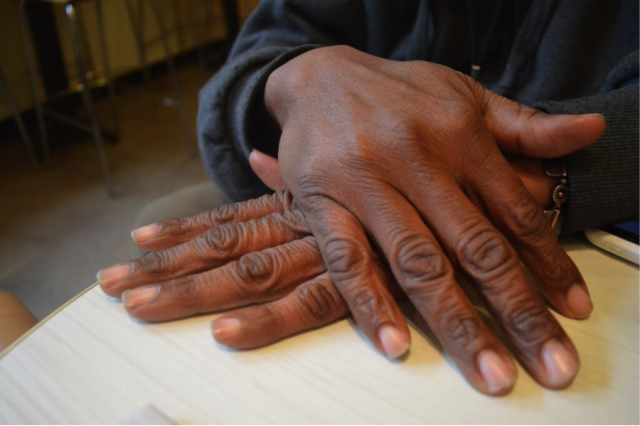 “I’m from Washington, D.C. I was raised in northeast, right across the street from Hechinger mall. John Hechinger owned a house on the block that my family lived in. My family was one of the first black families to move in to that neighborhood.

I was an alcoholic as a child. That sounds pretty wild to say, but even as an alcoholic child I had a pretty good childhood. I experienced several traumas as a kid, but the biggest trauma was losing my brother, my grandfather, and my godmother at seven years old. Very sad. I withdrew. My mother was just devastated, she was never the same.

One of my father’s friends was at the house and they gave me some scotch. I don’t know why. The thought was that if you give a child some alcohol when they are small they’ll hate the flavor and won’t want to drink when they grow up. Well in my case it was the opposite – I fell in love with it.

I’m sober now. I haven’t had a drink in thirty-five years. But I’ll always be an alcoholic. When my grandmother died… she was my heart. Usually my cousins and my surviving brother and I, in our mourning we would drink. And I would usually drink a fifth. But that day I couldn’t get drunk and my stomach was churning.

That Sunday night, I picked up the Washington Post and there was a section dedicated to alcoholism. That had never happened before. What happened was known as the Easter decision, and the surgeon general had determined that alcoholism was a disease. It was the first time that had ever come out and they did a series of articles about it.

This place I’d been going to look for employment… well, two doors down the hall had an alcoholism program that I had never even noticed. Next day I went there and started working on my sobriety. I ended up working and volunteering there too.

The place I once drank and sold liquor is the same place that I started giving back to the community – down the street from Hechinger mall.

I’ve seen homelessness go from a concern, to an issue, to an epidemic. Homelessness is a health issue, very much so. Mental health, emotional health, physical health. People are misdiagnosed because they can’t get the proper care. When you’re homeless some days you gotta try to get a shower or a meal or try to get housing. So you can’t always make your doctors appointments. That means you’re not getting adequate care or adequately diagnosed – that was part of my experience.”