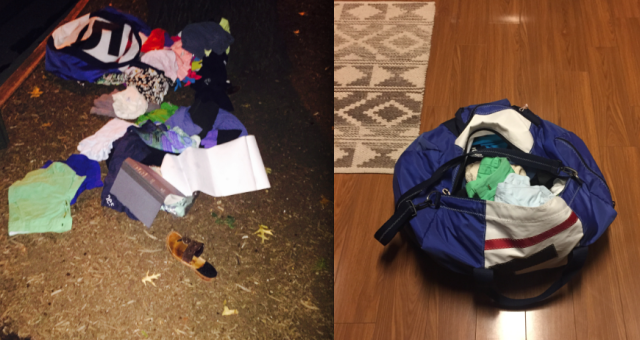 Just wanted to share two things that happened to me this morning in Columbia Heights. I came out around 5:30am on 14th and Irving to walk my dog and about half way down Irving (going toward 13th) and I find a bunch of clothes strewn about. It took me a minute to realize that this wasn’t a pile of things set by the street by someone trying to get rid of them, but was instead a dumping ground for what appeared to be the remnants of a robbery.

So, being 5:30 in the morning, I didn’t want to just stand there by it while I waited for police to show up, so I quickly scooped everything back into the bag and continued on my walk. About 7 minutes later, and on the other side of the road, I noticed a man coming up behind me. I had stopped at a tree right before the CVS for my dog to go to the bathroom and turned to face the oncoming person so I didn’t have my back to him while I was bent over cleaning up after my dog. As I was standing back up, I realized the man had stopped and was standing directly in front of me. He stared me dead in the face with crazy eyes and as I tried to move around him I said “hey” hoping that he would move along but he instead starts yelling “WHAT THE F**K are you doing??? Picking up dog poop???”

So I respond, “Yes, dogs poop and you have to pick it up… That’s how this goes. I am doing what I’m supposed to.” So he then steps toward me and starts screaming “YOU LOOK STUPID!!! YOU LOOK SO F*****G STUPID RIGHT NOW, YOU STUPID B***H!” At this point I have to reach into my pocket to grab my pepper spray and wave it at him and scream for him to go on and get out of my face. He started to move back at this point, so I took that opportunity to dart across the street. He followed along with me as I ran up the other side of the street, still screaming obscenities at me until I was able to get into my complex.

I am certain he was on drugs, but what also alarmed me is he appeared very normal looking aside from his insane eyes. No dirty clothes or bad hygiene or drug user look to him. His hair was done in twists and he looked to be maybe in his late 20s/early 30s. I’m still very perplexed over why anyone would be so infuriated by me cleaning up after my dog, so can I only assume he was on one of the new synthetic drugs. Just be very aware of your surroundings, neighbors. I hate to think what might have happened to me if I didn’t see him coming or was without my pepper spray.

Long story short, I immediately called MPD and reported the man and also turned in the bag I found. I included the pictures below and hope it finds its owner.”