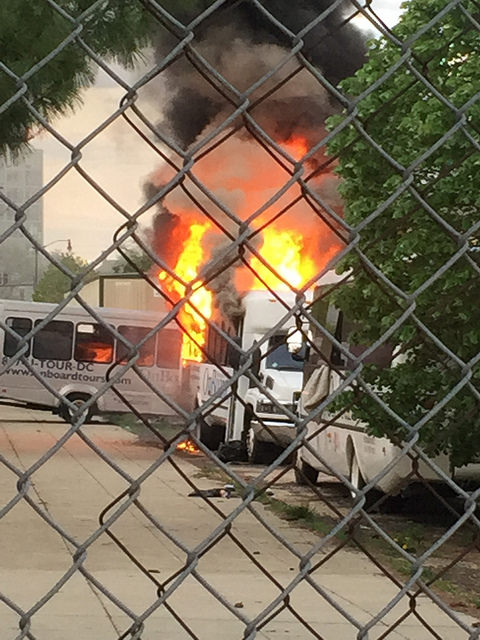 Today [Tuesday] while I was walking home from work up North Capital St I witnessed smoke that started to pour out of a shuttle bus that was parked on the closed off section of the O St NE unit block. This smoke quickly turned dark black and I proceeded to phone in what was apparently a fire to 911. As I did so large flames began to emerge from the vehicle, and a number of apparently homeless people began to exit from a number of other similar shuttle buses parked nearby. One of these people thanked me for phoning in the fire but that proceeded to immediately ask if I had any money. The fire quickly engulfed the vehicle and I could feel that heat of the flames from at least 25 yards away. I just hope that no one was trapped in that bus.

I thought that it was worth writing in about this issue for a number of reasons.

I have noticed that this odd section of O St NE, which is fenced off at both ends and contains a number of apparently disused shuttle buses has become something of a squatter camp for homeless people and I have often noticed them milling about the immediate area during the evenings. This is an area near the Washington Firehouse Restaurant (somewhat ironic) and and the NOMA metro station and this block adds a particular level of blight to an area that has been improving in recent years. I don’t understand why this street is shut off, why these buses are haphazardly parked in the area and why it has been allowed to become a defacto camp for homeless people. Apparently something went wrong (to my untrained eye it appeared that an accelerant might have been involved as the fire spread extremely quickly), and this would seem to demonstrate the type of public safety hazard that squatter camps can impose.

I also wanted to bring up an issue that has been discussed on PoP recently, namely 911 call response times. My call to 911 was immediately answered (a good thing since I was apparently the first person to phone it in) and fire trucks were dispatched before the call was over. DC Fire & EMS arrived within 5 minutes of my call and quickly extinguished the fire. Not sure if the quick response time was due to it being a vehicle fire but I thought it was worth mentioning that, at least in this case, DC 911 and emergency services performed as any DC resident would hope.” 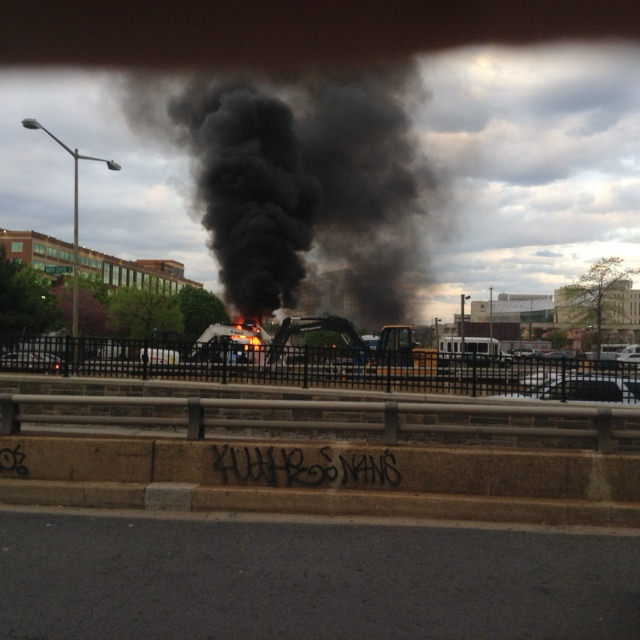