In the blue corner:

“Concerned District residents are petitioning Mayor Muriel Bowser and other city officials for a moratorium on building permits for rowhouse “pop-up” conversions that are changing the character of D.C. neighborhoods. The petition asks the Mayor and other city officials to place a moratorium on building permits for rowhouse conversions to apartment buildings until D.C.’s Zoning Commission has completed its rewrite of the zoning rules. This request builds on a similar request from then-Councilmember Muriel Bowser in July 2014 to the Department of Consumer and Regulatory Affairs (“DCRA”) when then-Councilmember Bowser asked for a “hold” on any building permit requests until the Zoning Commission settled the issue of pop-ups. “Pop-up construction could have adverse, long-term effects on properties and neighborhoods that have not been fully considered,” then-Councilmember Bowser stated (See Attached Letter).

“We have heard from many seniors and other residents whose homes have been damaged from pop- up conversions,” says long-time D.C. resident and StopthePopDC member, Tracy Hart. “We need an immediate moratorium to protect homes from irreparable damage and to protect the character of our rowhouse communities.”

“Pop-up” is the term used to describe single-family rowhouses that have been converted to apartment/condominium buildings. Developers typically add one or more stories to an existing rowhouse and build large rear additions to gain square footage for each condominium. The resulting pop-up apartment buildings have been criticized as dwarfing nearby rowhouses and blocking air and natural light. Each condominium unit typically lists for $500,000 to $900,000.
StopthePopDC is a community group working to curb the practice of developers converting single- family rowhouses into multifamily apartment buildings (“pop-ups”).”

In the red corner: 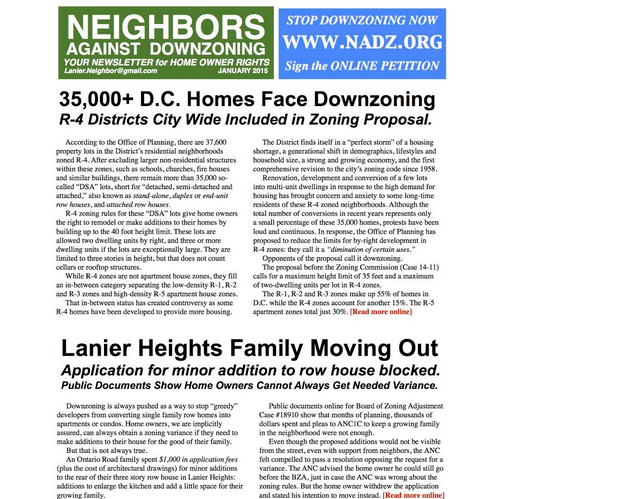 Full release in PDF below: