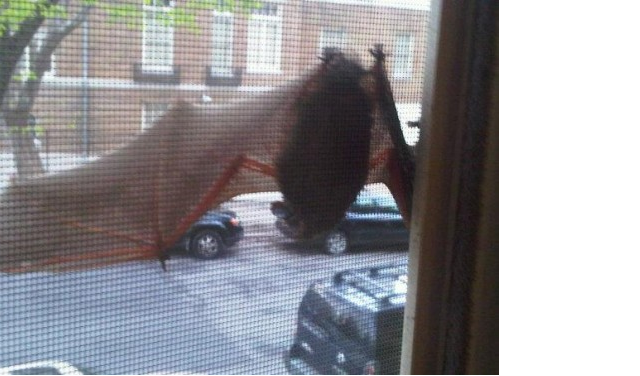 From the Petworth listserv:

“To all Powell Elementary Parents,

This evening [Tuesday] while playing baseball with my son on the baseball field, my son and I, along with few other folks out on the field and soccer field, noticed hundreds of bats swarming inside the chimney of the school.

It looked like a scene from a halloween/Dracula movie. I stopped a police officer to see if he could alert the custodian since there was a door open to the school. The officer thought the section of the school thats connected to the chimney was blocked off, but wasn’t sure.

As we walked home, I’m was not sure if the officer was able to talk to anyone at the school tonight because I saw him ride towards the back of the school since no one answered the front door. We wanted parents to be aware in order to take the necessary precautions on Wednesday morning.

I’m hoping the school is sectioned off from the bats for the safety of all the students.”

“Did you get a close look?

These could be Chimney Swifts – small birds that could be mistaken for bats – kinda look like cigars with wings. These birds roost in chimneys in groups, and may swarm around these roosts in the evening. During fall migrations these groups can be large.

They pose no threat. Practically speaking, neither would bats, for that matter. Little Brown Bats would be the common bat around here. They eat insects (mosquitoes) and have been hit hard with a fungus in recent years, making them much less common. We definitely want them around.”

Ed. Note: Back in June we learned a Big Brown bat in Ward 1, was determined rabid by the DC Department of Health. Fortunately Powell is in Ward 4.