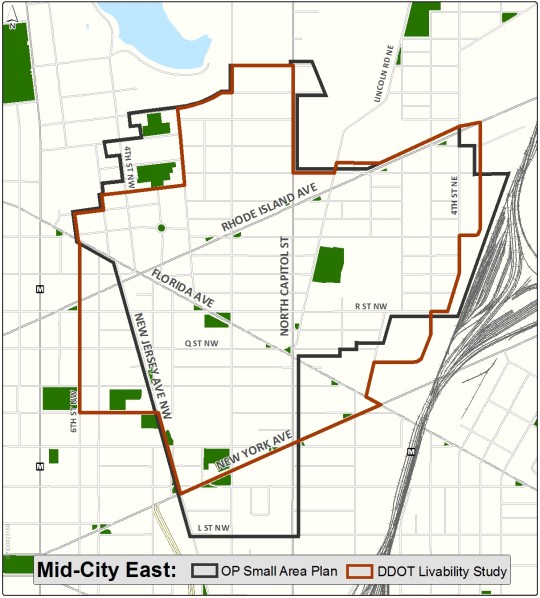 From the DC Office of Planning:

“I am very pleased to present the Draft Mid City East Small Area Plan, a framework for conservation, development and connectivity in the neighborhoods of Bloomingdale, Eckington, LeDroit Park , Bates/ Truxton Circle, Hanover, Sursum Corda and portions of Edgewood and Stronghold. The plan is downloadable here. Please let me know if you would like me to send you a hard copy for your review.

I would like to extend my sincere thanks to the Advisory Committee, for your thoughtful approach and feedback throughout this process – you have been integral to shaping this plan. Over the past year, a team of city planners, consultants, agency representatives and community leaders led a comprehensive planning effort that thoroughly examined the study area and engaged its residents in a robust public engagement process that incorporated both traditional and unconventional methods of outreach. The resulting plan is evidence of the impact of teamwork and citizen involvement in generating ideas and setting priorities to achieve the shared goal of making the District of Columbia a more inclusive city and a better place to live. As you’ll note, the plan places a premium on preserving and enhancing neighborhood character and enhancing corridors, especially North Capitol Street.

The Office of Planning will be accepting formal feedback from constituents until Tuesday, September 2, 2014. Public comments will be accepted in writing via email, U.S. mail, or in person at the Mid City East Mayoral Hearing on Tuesday, July 29th, 2014 from 6:30-8:30pm @ The Summit located on 116 T Street, NE. All comments in writing should be directed to:

Prior to the hearing, the Office of Planning will host Office Hours on Wednesday, July 16 from 9-10:30am at the Big Bear Café located at 1700 1st Street NW and on Thursday, July 24th from 4:00-6:00PM at the Rustic Tavern located at 84 T Street, NW. This will be an additional opportunity for the community to view the plan and provide formal feedback via Public Comment form, which will be provided and collected on site. If you would also like OP to come to your organization’s meeting to present draft plan recommendations, please let me know.

As noted, the plan is available online at www.midcityeast.com and at the various locations listed below:

The vision for the Mid City East Small Area Plan is to improve quality of life and enhance neighborhood amenities and character while supporting a community of culturally, economically, and generationally diverse residents. The Draft Plan incorporates the goals from the Comprehensive Plan as well as the goals developed through the community and stakeholder process.

The Small Area Plan was also informed by technical analyses including an Existing Conditions analysis, a Historic and Cultural Resources report, and a Market Study. The plan also incorporates recommendations from the District Department of Transportation’s Mid City East Livability Study, which was conducted in collaboration with the Office of Planning (OP) and was completed in October 2013.

The Office of Planning (DCOP) has published for public review and comment the Draft Plan for Mid City East. The DCOP is providing a 30-day public comment period on the Mid City East Plan. Comments must be submitted to the office by the closing date, Tuesday, September 2, 2014.

The Draft Plan conveys a shared vision, records the guiding principles that were developed through the community-based planning process, and includes key recommendations for neighborhood character, commercial revitalization, redevelopment, public realm, parks/green space and connectivity. It includes an implementation strategy to serve as a roadmap for implementing plan recommendations including projected timeframe and responsible entity. The Draft Plan provides residents, land owners, developers, city officials and District agencies with a framework to guide future development in the study area.

The DCOP, working in collaboration with the cooperating agencies, will consider all public comments on the Draft Plan and make its final recommendations on the project to the Mayor of the District of Columbia. Subsequently, the Mayor will submit to the District of Columbia City Council for consideration a Revised Draft Plan. The Council will provide additional opportunities for public comments, and will make its final decision regarding this project and any modifications and conditions it might impose on the plan. The Mayor, through the cooperating agencies will implement the plan.

Written comments on the Draft Plan must be submitted by September 2, 2014. Comments must include a name, address and any organization for which the comments represent. Please send all comments to:

In addition to receiving written comments on the Draft Plan, DC Office of Planning will host a Mayoral Hearing on July 29, 2014, from 6:30-8:30pm at The Summit at St. Martin’s located at 116 T Street, N.E., Second Floor, Washington, DC 20002. Please note that comments can be submitted until September 2, 2014. At the hearing, DC Office of Planning will provide boards with visual representation pertaining to the recommendations set forth within the Draft Plan and respond to any questions relative to the graphic displays. Following this, members of the public will have an opportunity to offer comments for the public record.”