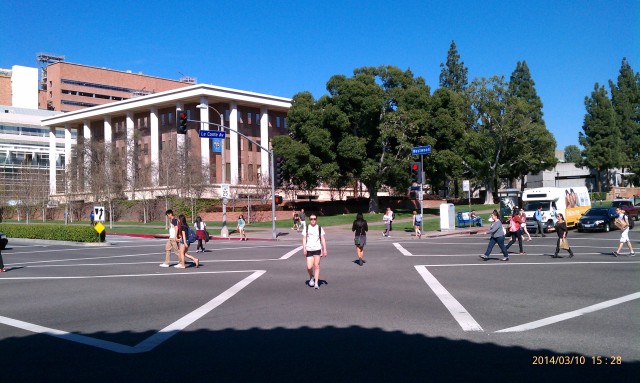 I was near the UCLA campus this weekend and noticed several of these diagonal crosswalks. It looked like an efficient way to move large numbers of pedestrians at once, thus clearing the way for smoother automobile traffic, since all crosswalks have a walk sign at the same time.

I’m wondering if one of these would work at the intersection of 14th and Irving, which is one of the worst intersections in Columbia Heights. Metro Buses would be able to make a right turn from Irving to Southbound 14th without having to wait for pedestrians. During rush hour, sometimes only one or two cars are able to make a right or left turn after pedestrians have cleared the crosswalks.

What do the readers think and who in the city is in charge of traffic design?”

We actually have one in Chinatown too – it’s called a Barnes Dance from 7th and H St, NW: 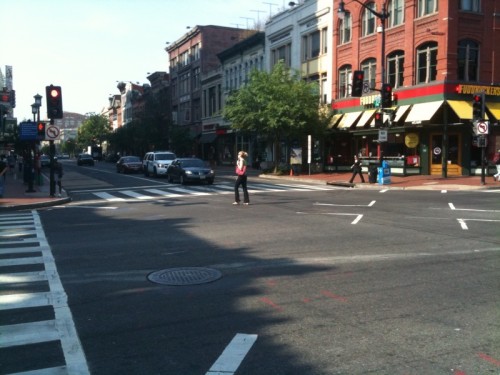 DDOT was in charge, more info from a press release issued in 2010:

“The District Department of Transportation is launching a new pilot program aimed at providing safer crossings for pedestrians at one of the District’s most traversed intersections: 7th and H streets, NW in Chinatown. The new traffic pattern, commonly called a “Barnes Dance,” allows pedestrians to cross in every direction, including diagonally, at the same time while vehicles on all four sides of the intersection are stopped at a red signal. The change is scheduled to be implemented on Wednesday, May 12 at 10 am.

“We are really excited to launch this pilot, and the intersection we’ve chosen is a great place to test this innovative timing technique,” said DDOT Director Gabe Klein. “Nearly 27,000 pedestrians use this intersection on an average day and about 26,000 vehicles. We believe by utilizing the Barnes Dance we can minimize conflicts and create a safer environment for everyone.”

Statistics show there were 35 total vehicle crashes at that intersection with 9 injuries (4 involving pedestrians) in 2009, and a total of 15 pedestrians injured from 2005-2008.