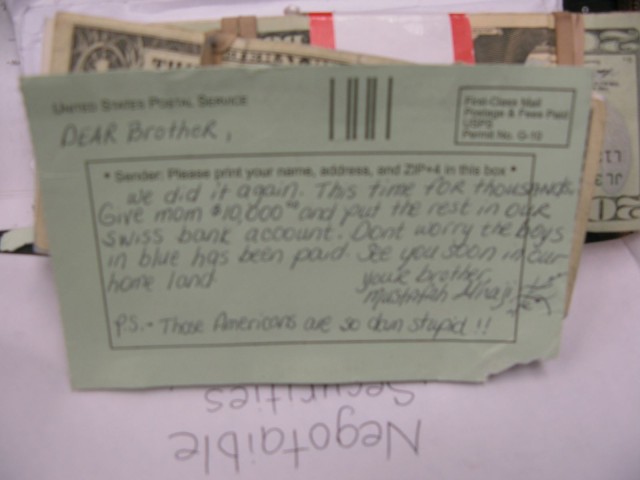 From the Takoma Park Police:

“Chief Alan M. Goldberg from the Takoma Park Police Department announces the arrests of Consuelo Ann Green, 39, and Sharon Denise Erickson, 51, both of Baltimore, Maryland, for Conspiracy to Commit Theft and Theft Scheme.

On December 30, 2013, at approximately 12:11 pm, Takoma Park Police responded to the 7600 block of New Hampshire Avenue, Takoma Park, Maryland, for a theft scheme in progress. A victim from a previous incident recognized one of the suspects that had taken her money in a previous scam. That victim immediately called the police and gave a description of the vehicle the suspects were driving. Officers arrived and identified the suspects in the vehicle; one of whom was the potential victim. Police quickly identified Green and Erickson. Located in the back seat with one of the suspects was a bag with money bags inside and filled with what appeared to be large amounts of cash. A search of the bag incident to arrest revealed the money inside was fake stacked paper like money and various other items of evidentiary value were seized and impounded.

At approximately 1:55 pm, detectives were able to speak with one of the suspects and gathered further information regarding the theft scheme.

The victim indicated that Green approached her and advised that she had just found a brown bag filled with money and she showed the victim the bag. Green told her she would get half the money if she would pay her money and give her her bank information. Erickson showed up and pretended to not know Green. Green handed Erickson a large amount of “money” and they talked like they knew each other. Green then instructed the victim to go to the bank. The victim did go to her bank to withdraw money to give to the suspects. Green and Erickson got into the victim’s vehicle with her and before the victim was able to give Green and Erickson her money, Takoma Park Police arrived on the scene.

Takoma Park Police made contact with the U.S. Secret Service, Washington Field Office, who provided an agent to respond and assist with the investigation. This type of scheme is coined “the flim flam” or “pigeon drop” scam. This is a regional enterprise spreading along Maryland, Washington, D.C., and as far north as New York, with possible links to California.

The police department is concerned there may be additional victims of Green and Erickson’s scheme and encourages victims who have not made a report to please call the Takoma Park Police at 301-270-1100.

You should always thoroughly research and confirm the validity of any dealings, business or personal, with persons/entities who are not known to you.

UPDATE: Green and Erickson, suspects, dressed up as nurses with medical paraphernalia and targeted elderly homes with elderly individuals, and possibly nursing homes and medical clinics.”