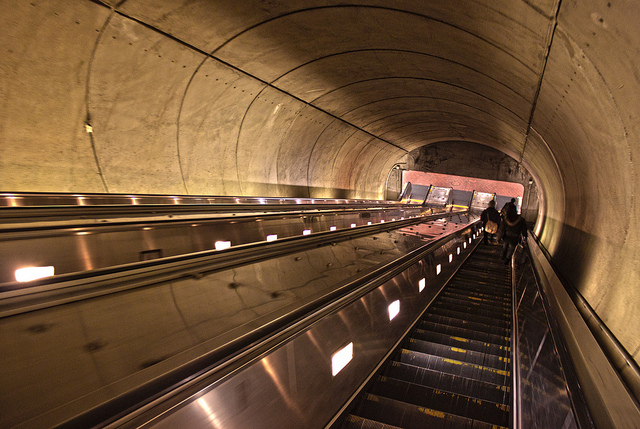 “Starting Monday, November 4, Metro contractors will begin a five-month project to replace the two entrance escalators on the east side of Connecticut Ave NW.

The existing east-side escalators were installed when the station first opened in 1981, and their reliability has decreased dramatically over time. As such, Metro engineers have determined that a full replacement of the escalators is necessary because rehabilitating the aging units is neither practical nor cost effective in the long term.

The two escalators on the east side of Connecticut Ave will be barricaded for the duration of the project to allow for construction activity that is expected to last until Spring 2014. During this time, riders can enter or exit the station using the escalator, stairs or elevator on the west side of Connecticut Ave NW. The closure of the east entrance is necessary to ensure safety while heavy lifting of escalator segments takes place in a tight workspace. Additionally, by closing this side of the entrance and replacing both escalators at the same time, Metro will be able to complete the project in half the time with crews working two shifts per day.

The Van Ness project will be the first two under a $151 million contact with KONE Corporation to fully replace an additional 128 escalators by 2020, including 14 projects starting by next summer at Bethesda, Columbia Heights, Friendship Heights, Georgia Ave-Petworth, Glenmont, Mt Vernon Sq and Shady Grove.

Metro recently reported that more escalators are in service today than at any point in nearly five years. For the 2nd quarter of the year (April through June), Metro achieved an availability score of 91.9 percent — meaning that more than nine of every ten escalators were in service during operating hours.

In addition to the escalator replacement projects, Metro has already “rehabilitated” to “like new” condition 103 escalators across the system with 33 more to be completed by mid-2014. Rehabilitation projects result in the replacement of all critical parts, including the escalator’s steps, handrails, motors, controllers, chains, and other moving parts.”