Though it receives little attention in the media, competitive canoeing ranks high among the city’s sports achievements. Washington has participated in competitive flatwater canoeing at the Olympics ever since the sport was first introduced in 1924, and much of America’s success has been due to the athletes of the venerable Washington Canoe Club, headquartered in one of the Georgetown waterfront’s most historic and picturesque structures, a 1905 boathouse at 3700 Water Street NW. The green wooden-shingled structure, perched on the edge of the flood-prone Potomac river, has deteriorated over the years and gradually fallen into disrepair. Its future is now largely in the hands of the National Park Service. 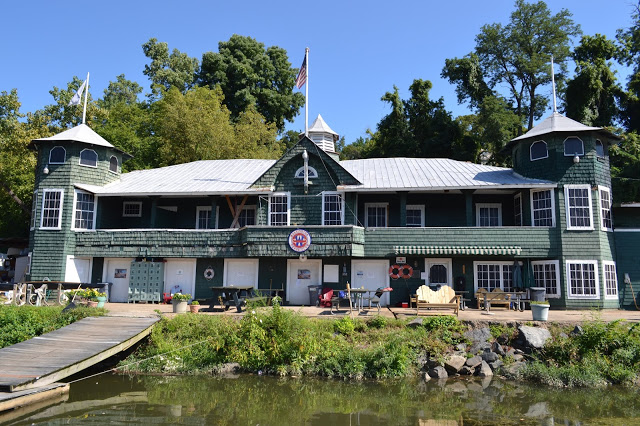 A hundred years ago, the Potomac river was the center of attention for summer sports and recreation, a place where refreshing breezes off the water could ease the swelter of un-air-conditioned city living. Many people would set up summer camps along either side of the Potomac from Georgetown to Great Falls and beyond, and hundreds would line the shores of the river or the railings of the Aqueduct Bridge to watch hotly-contested boat races. A June 1904 article in The Washington Post rhapsodized that “The beautiful stretch of water from the Analostan [Theodore Roosevelt Island] Boat House up to within a dozen furlongs of the Chain Bridge is the one most utilized by the oarsmen and canoeists, and the ever-passing throng makes the stream take on the appearance of the Grand Canal at Venice, with the gondolas left out.” 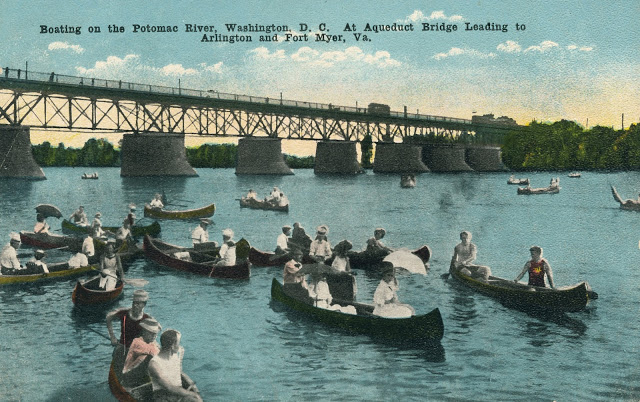 Postcard view of recreational boaters on the Potomac, circa 1915 (author’s collection).

Recreational sports of all types burgeoned in the late 19th century as Americans increasingly came to value the benefits of physical activity as part of a well-rounded life. Earlier attitudes that frowned on such activities faded as more of America’s population became concentrated in cities and needed opportunities to escape the often unhealthful confines of 19th century urban spaces. Canoeing was one of many new pursuits that were eagerly taken up. England’s Royal Canoe Club, founded in 1866, held its first canoe races in the 1870s, and the New York Canoe Club was founded soon after in 1871. Washington’s first canoe clubs formed in the 1880s, when primitive kayaks called “sneak-boxes” plied the Potomac.

The Potomac Boat Club, which predated the Washington Canoe Club, was dominant by the turn of the 20th century. Its annual Potomac River Regatta “is regarded as one of the greatest in America, and annually attracts the best oarsmen in America,” according to the June 1904 Post article, which also noted that one of the prizes at stake was the “magnificent Washington Post cup… one of richest prizes for rowing in America” as well as the Evening Star cup, which the Post writer seemed less interested in. In all, the regatta included 13 different events.

The following year the Washington Canoe Club was founded, in part by former members of the Potomac Boat Club. An article in the Evening Star in August 1905 noted that an organizational meeting had been held and a spot for a commodious, two-story boathouse had been secured on the upper side of the Aqueduct Bridge, with construction planned to begin immediately. According to the article, the site was leased from the Chesapeake & Ohio Canal Company, with the proviso that any improvement made on the property by the club might be removed at a later date. In fact, the club’s new boathouse would last far longer than the C&O Canal Company itself. 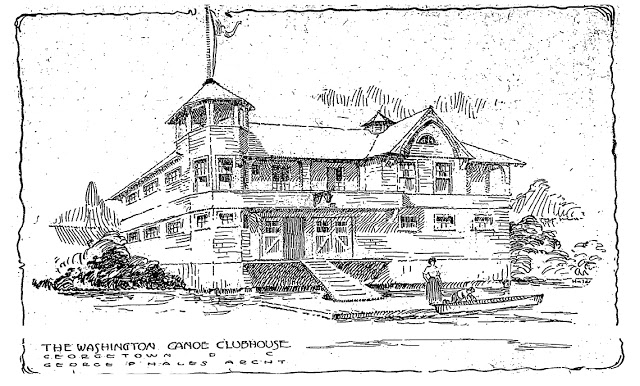 Hales’ drawing of the new boathouse, as reproduced in The Washington Post, Sept. 3, 1905.

Architect George Percival Hales (1880-1970), a 24-year-old native of Cambridge, Massachusetts, was chosen to design the boathouse. An avid original member of the club, Hales had enjoyed canoeing on the Charles River in Cambridge during his school days and had recently moved to Washington to start his architectural practice. Hales designed the boathouse in the Shingle style, an architectural vocabulary very popular in New England but relatively rarely seen in Washington. According to the Post, Hales’ design was based on Charles River canoe houses he knew well. The shingled finish gave these structures a rustic look that Victorian tastes found fitting for country resorts and seaside cottages. The style was thus the perfect choice for the canoe club’s boathouse, conveying a sense of the club’s prosperity and good taste.

The boathouse was largely constructed between August and October of 1905. Club tradition holds that it was built by its members using salvaged timbers and lumber from burned barns. It had room for 125 canoes in racks on the first floor as well as a grand ballroom and men’s and women’s lounges on the second floor. Originally designed asymmetrically with a tower on the north end, the boathouse was intended to be expanded, and five years later it was doubled in size by an extension to the south with a corresponding tower on the south end. The Washington Times reported in 1910 that the expanded clubhouse was considered the finest on the Potomac. “The outside of the house is most pleasing… Wide porches extend the whole length of the house from both first and second floors.”

The expanded boathouse also included a grill room on the first floor, a feature no other Potomac boathouse could match. The grill room was decorated with a cartoon frieze of club members painted by Felix Mahony (1867-1939), a cartoonist for the Evening Star and founder of the National Art School. 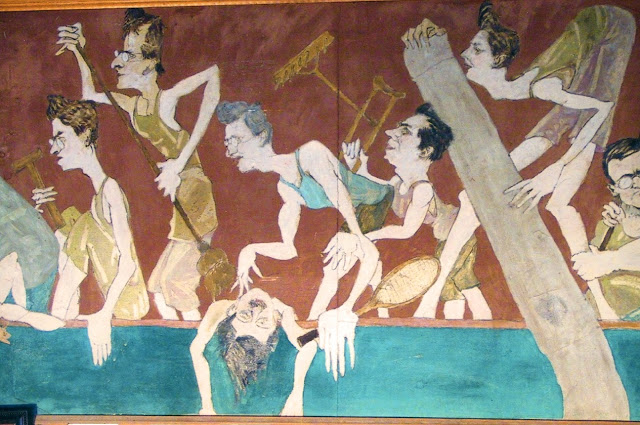 From its elegant new boathouse, the upstart Washington Canoe Club quickly came to be a powerhouse in the canoeing world, often beating rivals such as the Potomac Boat Club, the Analostan Boat Club, and the Kolumbia Kanoe Klub. In 1906, the year after it formed, the club won the relay race at the annual meet of the Interclub Canoe Association, with some 2,000 spectators on hand. In July 1909 the club joined the Analostan and Potomac clubs in leading an elaborate nighttime “parade” on the Potomac, complete with 100 canoes “brilliantly lighted with Japanese lanterns and decorated with flags, club colors and festoons of flowers,” according to the Star. The line of boats “extended for half a mile and lit up the river from bank to bank…. Thousands of persons lined the banks of the river and crowded the Aqueduct bridge to watch the parade.” 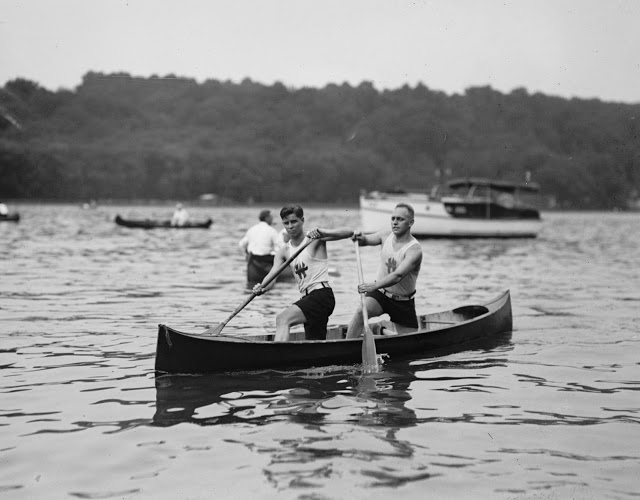 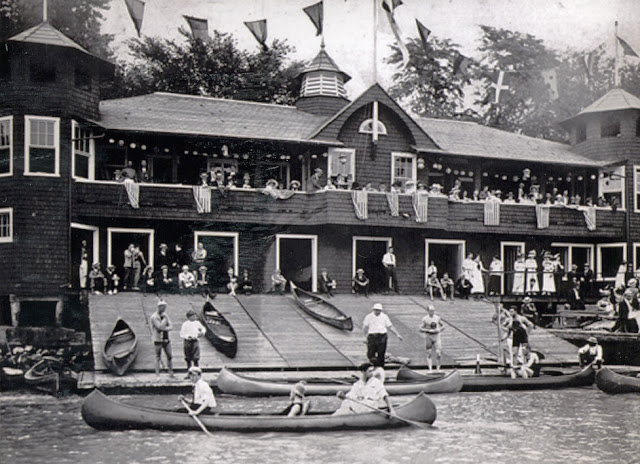 One of the club’s greatest achievements was in helping to get flatwater (as opposed to whitewater) canoe racing included in the Olympic Games. In 1924 the sport was first added as a demonstration sport, with the entire four-member U.S. team composed of Washington Canoe Club members. The U.S. team won three of the six events raced that year. Once canoe racing became a regular Olympic sport in 1936, the Washington Canoe Club became a permanent contributor to the U.S. team, sending representatives to every Olympic team up to the present day. Club highlights include Frank Havens’ 1948 silver and 1952 gold medals, a silver medal won by Francine Fox and Gloriane Perrier in 1964, and Norman Bellingham’s gold medal in the 1988 games. 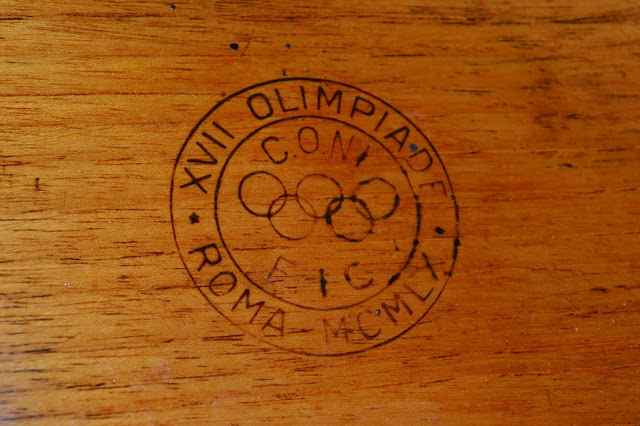 An insignia from the 1960 Olympics adorns the side of one of the Washington Canoe Club’s vintage canoes. (Photo by the author).

Throughout the 20th century, relatively few changes were made to the club’s historic boathouse. In the 1920s, a new boat shed was added to the east end of the building and a second floor was added to that shed in the 1970s, but few other changes were made to the original boathouse. Even the playful cartoon mural in the downstairs grill room, painted in 1910, still survives and was restored in 1981 by Charles W. Lundmark.

The structure’s survival is remarkable given the beating it has taken from man and nature. Like the Hains Point Teahouse we previously profiled, the wooden WCC boathouse has been vulnerable to repeated damaging floods. It was originally built out on to the river on wooden pilings, with its first floor about eight feet above the water line. Not only was it frequently flooded, but ice jams in winter damaged it as well. Ice floes pushed the building five feet downstream in the 1950s, but the structure was returned to its original spot. The Army Corps of Engineers did extensive work in the river in the 1960s, including removing most of the old stone piers of the Aqueduct Bridge and depositing the stone as riprap along the shore by the boathouse to prevent erosion. The Corps subsequently laid a large new water pipe along the river’s edge as part of enhancements to the city’s water supply system. The pipe was laid directly in front of the boathouse and paved over with concrete, thus leaving the boathouse where it stands now, some 20 feet away from the new shoreline.

With creation of the C&O Canal National Historical Park in 1971, the National Park Service took control of the land that the Washington Canoe Club had previously leased from the canal company (and later the B&O Railroad). The club continued its lease with the park service. Then in April 2007, the Department of the Interior’s Inspector General issued a report on private use of public lands that criticized such leases as insufficiently benefitting the public at large. Soon the park service was under pressure to review the canoe club’s lease as well as the condition of the boathouse itself, which the park service considered to be its property. The club has been allowed to continue its lease on a short-term basis, but the long-term outlook remains unclear.

A structural assessment concluded the boathouse was unsafe, and the park service ordered the canoe club to vacate the deteriorating structure in 2010. Limited emergency repairs were then undertaken to stabilize the building, but it continues to deteriorate and remains closed to this day. The canoe club still uses the surrounding property and stores boats in the shed on the east side of the historic building, but without a long-term lease or clarity about its legal status it cannot undertake more extensive repairs. In 2012, the D.C. Preservation League included the building on its list of Most Endangered Places.

Meanwhile, the park service mulls plans for the long-term future of the stretch of Georgetown waterfront where the boathouse stands. Earlier this year it completed a feasibility study for a planned “non-motorized boating zone” that it envisions stretching from the western edge of Georgetown Waterfront Park to a point upstream of the WCC boathouse. The study presented several options for expanding public use of that area for non-motorized boating, but it did not commit to any specific development plan. Fortunately, the study endorsed the idea that the Washington Canoe Club building “should remain.”

Now comes the hard part. As it asserts control of and responsibility for the historic building, the park service will need to take real steps to preserve the structure as a functioning boathouse for the next hundred years. Let’s hope it steps up to this worthy challenge. 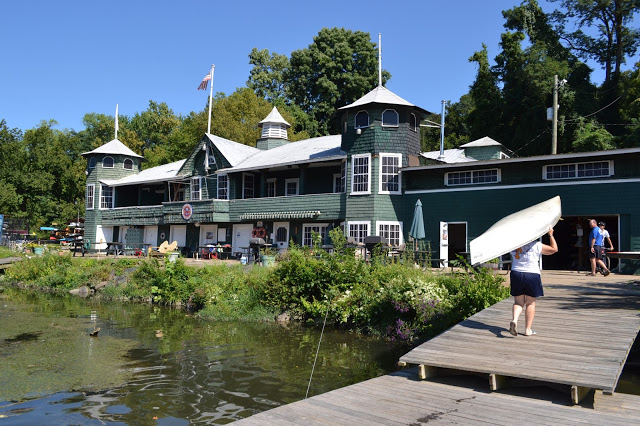 Photo by the author.

Special thanks to Jim Ross, vice president of the Washington Canoe Club, for his invaluable assistance and to Chris Brown and Andrew Soles of the club for their support. Other sources for this article included the club’s website, the National Register of Historic Places registration form for the Washington Canoe Club, the Historic American Buildings Survey documentation of the boathouse, the National Park Service’s recent Georgetown Non-Motorized Boating Zone Feasibility Study, and numerous newspaper articles.