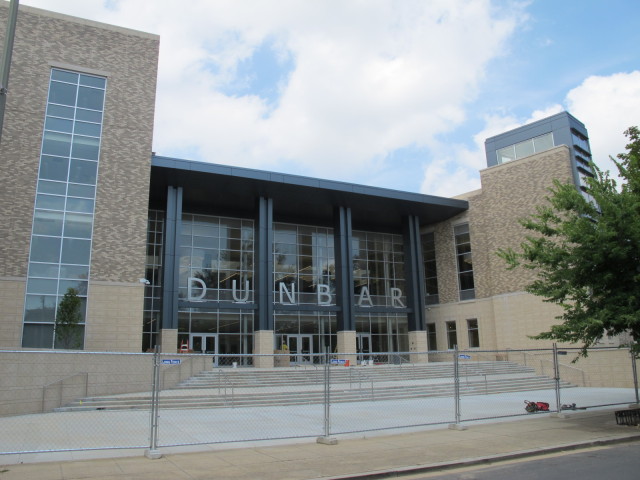 Jeff Tignor lives in South Manor Park. If you have a book you’d like to recommend/review please send an email to princeofpetworth(at)gmail with book review in the title. We discussed this summer’s general reading recommendations here.

Alison Stewart’s excellent new book First Class: The Legacy of Dunbar, America’s First Black Public High School, tells the story of a groundbreaking educational institution born in Washington, DC as a result of a unique set of circumstances and later hobbled by home rule politics, social class conflicts, and racial desegregation without integration. Ms. Stewart, an award-winning journalist who has worked as an anchor and reporter for several major commercial TV networks, as well as NPR and PBS, and whose parents graduated from Dunbar in the 1940s, uses Dunbar as a lens for examining the history of education in Washington, DC. The book covers three distinct eras: First, from 1807-1954, a detailed history of African-American education in Washington, DC and how Dunbar became America’s first African-American public high school; second, beginning with the 1954 Brown v. Board of Education and Bolling v. Sharpe decisions, a transitional period in the years surrounding school integration; and third, Dunbar’s post-1960 full transformation to the neighborhood school it is today, struggling with the challenges of urban education. As someone whose family history in Washington, DC dates to the post-civil war 1800s, I learned new facts about DC’s history and was struck by the irony of Dunbar alums arguing for desegregation at the Supreme Court and then seeing their prestigious and beloved alma mater fray as the unconstitutional system of segregation was dismantled. I was moved by the heartbreaking stories of students and educators trying to honor Dunbar’s past and simultaneously create a present and future that will allow the school to once again become a launching pad for great careers.

Dunbar came to be because unlike in much of the South, there were no laws restricting the education of free blacks in Washington, DC. Small schools such as the Bell School and the Normal School for Colored Girls begat the Preparatory High School for Colored Youth, M Street High School, and ultimately in 1916 Dunbar High School. As the only academic high school for African-Americans in Washington, DC, Dunbar effectively became a magnet school. Students from DC had to pass an 8th grade exit exam to enroll and students transferring in to Dunbar as part of the Great Migration had to take an entrance exam. Dunbar’s curriculum focused on English, math, the sciences, ancient history, music, Latin, French and German. Many of its teachers and administrators had graduate and master’s degrees and included doctors, lawyers, and 2 of the first 3 African-American women to receive PhDs. Dunbar sent students to, among others, Harvard, Yale, Brown, Amherst, Williams, Dartmouth, Wellesley and the University of Michigan. Notable alums include Edward Brooke, the first black US Senator elected by popular vote, Charles Drew, the creator of the blood bank, William Hastie, the first African-American Federal judge, and Wesley Brown, the first African-American graduate of the Naval Academy.

In 1954, Charles Hamilton Houston and two of his fellow alums from the M Street School, Dunbar’s forerunner, were key members of the team that successfully argued for outlawing legally segregated schools in the states in Brown v. Board of Education and in the District of Columbia in Bolling v. Sharpe. From 1955 onward, Dunbar became a neighborhood school, with attendance solely based on the boundaries within which a child resided. One educator commented at the time that First & O NW was infamous as a gathering place for young men who were unemployed, out of school and “indecent in their public conduct.” Ms. Stewart writes: “It is bitterly ironic that three of the key players in dismantling legal segregation…learned their lessons at a school that became an unintended casualty of necessary civil rights action.” In a July NPR interview, Ms. Stewart described Dunbar benefitting from the glass ceiling segregation placed on Dunbar’s highly educated teachers as a “perversity.”

By the mid-1960s, Dunbar and several of its alumni and former teachers, who had moved on to other leadership positions in education in the city, found students not nearly as interested in the tradition-bound lessons that began in 1807. They found themselves having to answer tough questions from students: Why doesn’t Eastern High School have an Afrocentric curriculum? Why is Howard Law School no longer serving the needs of African-Americans seeking equality? Marion Barry came to prominence. Dunbar never did integrate. From the 1970s forward, “the economic and social woes of DC were Dunbar’s woes.”

Over the years, there have been periodic signs of hope; a pre-engineering magnet program focused heavily on the sciences and partially financed by corporate sponsors, a Dunbar graduate becoming a Stanford graduate, and most recently, the track coach who will pick up girls at home as early as 3:30am to get them to practice and who can point to every girl in a team photo and name where she is in college. Ms. Stewart ends on a positive note suggesting that given the demographic changes in the neighborhood – as we say in Popville, a mix of newcomers and long-term residents – maybe Dunbar will make history again, as its founders would have wished, “as the first truly, organically integrated school in Washington, DC.”