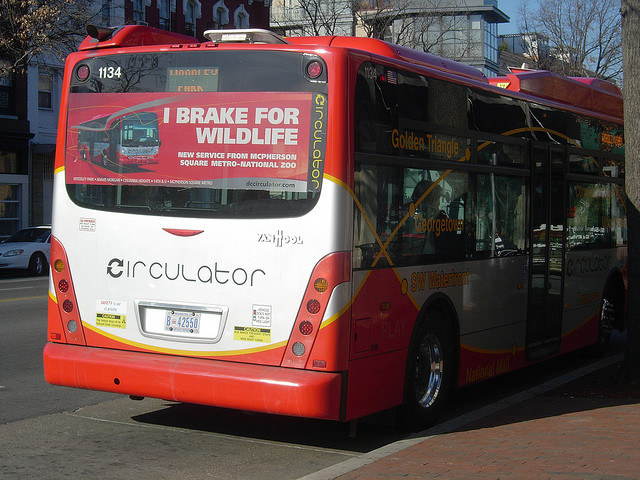 Jenn lives in SE DC in the Capitol Riverfront area. PoP-Ed. posts may be submitted via email to princeofpetworth(at)gmail please include PoP-Ed. in the subject line.

If you’ve lived in or traveled to Washington DC at some point since 2005, you have most likely seen or hopped a ride on a bright red DC Circulator bus.

Having lived on and off in DC circa 1991, I quickly became a Circulator Super Fan when I returned to the District in 2008…the Georgetown and Columbia Heights/14th Street routes becoming my de facto daily transit. When I moved to the still-in-progress Capitol Riverfront/Navy Yard area in 2009, I was ecstatic that the Circulator had made its way here as well.

Fast forward to today and the honeymoon is definitely over, a separation in place, and a potential divorce on the horizon. What went wrong, you ask?

In June a DC Circulator bus driver pulled our bus over at the Navy Yard Metro station stop (northside of M Street SE) and walked off the bus with riders still on it so she could chat up her two friends who happened to be walking by.

Then in July another DC Circulator bus driver on this exact same route pulled our bus over at the same Navy Yard Metro stop and exited the bus with riders still on board so she could make a cell phone call.

What’s the problem you ask? Well, the last stop on this route is at First and K Streets SE – not Navy Yard Metro – and many Circulator customers who live north of M Street SE ride it to the end of the line. I’m pretty sure these drivers are aware of the end of their driving route. In these particular cases the Circulator drivers in question actually acknowledged passengers still on board their buses, but then made a conscious decision to abandon their buses and strand riders – though only for five minutes or so – while they took care of their personal business. My words to the driver in June were along the lines of, “Hi, excuse me. There is still one more stop around the corner on First.”

She looked at me and said, “Yeah, I’ll be right back.”

But, alas. It gets better.

This past Saturday I was out walking my leashed dog eastbound on M Street SE. As we were passing by the new Gordon Biersch restaurant, saying hello to an employee who had come outside with a large paper bag of take-out food, a DC Circulator bus pulled up along side of us. The bus driver parked her bus in a clearly-marked ‘no parking’ zone, exited her bus, and headed over to the GB patio to collect what was apparently her bag of take-out. Even though my dog and I were about three to five feet down M Street at this point, this driver started screaming at us at the top of her lungs, “Hey that’s my food. Get away from my food! Get your dog away from my food! I paid for that food! Get your damn dog outta here!” Her tirade went on for a good two to three minutes.

I was completely taken aback and yelled back that she please stop and that my dog didn’t touch her food. My response only fueled her unwarranted rage. She continued to berate me for the sole reason that I and my dog were walking on a public city sidewalk in her general vicinity and that apparently did not please her.

Having the where with all to seek out a supervisor always parked on K Street SE I hustled myself over there to complain about this insane encounter. And there she was, the badly behaving driver, who saw me and starting coming after me, screaming and waving one arm in the air, the other hand firmly gripping her Gordon Biersch lunch. Her supervisor had to intervene and repeatedly gesture for her to get back. Walking away, the driver continued screaming and pointing at me. Her professionalism and commitment to espousing her employer’s “core values of safety and customer service are at the heart of everything we do” [http://www.firsttransit.com/About-Us] were truly heartwarming.

The supervisor, also with Gordon Biersch take-out in hand (guess that pit stop was as much for her as it was for the driver), asked me if I wanted to file a report (to which I gave a resounding “YES!”), and then she produced from the trunk of her car a nearly plain piece of paper with the words “First Transit” printed across the top.

I headed home, stopping two DC Metro police officers in my neighborhood to inquire about the feasibility of filing an incident report, then returned about an hour and a half later to hand over the detailed complaint form to the DC Circulator supervisor still camped out on K Street SE. The kicker to this already delightful day was what the supervisor said next: “Maybe she [the driver] reacted the way she did because of the size of your dog. Maybe she just doesn’t like dogs.”

She went on to say the driver told her she never left her bus and that the Gordon Biersch employee delivered the food to her [on the bus]. Hmmm…if she never left the bus, why the four-letter-word-littered outburst on the sidewalk?

That’s right, DC Circulator, blame the victim. I must have been asking for it. I must have have done something to compel this driver to call in a take-out order using a fake name (confirmed by Gordon Biersch), then park her bus and leave it like it was her own personal vehicle, and saunter across a public sidewalk to a dog-friendly establishment to pick up her parcel. Clearly, according to this DC public transportation employee’s supervisor, I did something wrong to justify such abhorrent behavior. I obviously chose the wrong size dog.

Monday morning, still reeling from this experience, I headed out with my first dog walking client of the day, a happy-go-lucky 10-lb Miniature Australian Shepherd. Tiny is a good way to describe her. On our walk we encountered another DC Circulator driver chatting up her supervisor about 200 feet away from where her bus was parked. This driver panicked when we crossed the street in her general vicinity. “I don’t like dogs. I’m afraid of dogs,” she commented as she took steps backwards. I asked her if she’d be more comfortable I picked up and carried the dog. Her response? “Yes.”

These last two incidents make me wonder what would happen if someone with a disability and a service dog attempted to board a DC Circulator bus with a fear-aggressive bus driver. Well, that’s a story for another day.

So it seems that if you ride a DC Circulator bus, you should allocate a bit more travel time as there’s a decent chance you will be left stranded for a few minutes while your driver takes a cigarette break, or makes their evening plans, or grabs a grande iced mocha from Starbucks. And if you’re a pedestrian – God forbid with a dog – who happens to cross paths with a dog-fearing DC Circulator driver on a city sidewalk, best you run as apparently you have no right to be there.

As I continue to pursue these issues directly with WMATA, DDOT, and First Transit (the company hired to run DC Circulator and from whom I have yet to receive a response about last Saturday’s incident), I’m left pondering, “What’s the lesson in all this?”

And then it came to me.

This is what you get for a dollar.