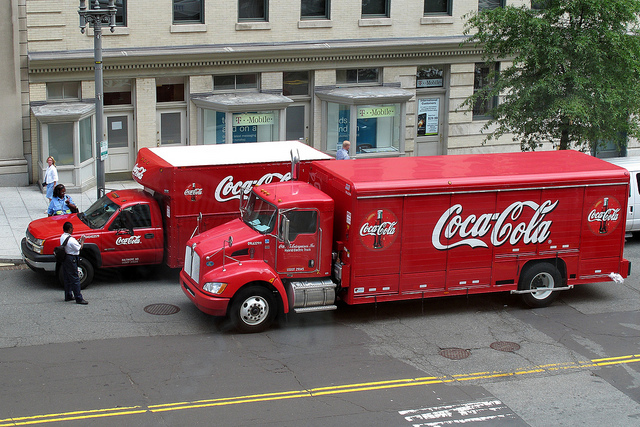 14th St. and Columbia Rd NW is a really busy intersection and was so long before DCUSA opened. It’s full of commuters and especially traffic heavy during morning and evening rush hours.

This corner is also home to a 7-11 and, like all stores, it needs to be refilled on a regular basis. The semi trucks that bring all the Cheetos and Coke have been parking in the space for the bus stop on Columbia Road for years and essentially block half of the road while unloading.

I get that the 7-11 needs to be restocked and they’ve got to park somewhere. If they’d unload and then move on I wouldn’t be writing. The issue is that a truck will park and then sit there for three to four hours at a time blocking half of the road. Sometimes they don’t even unload, they just park and sit there, which obviously means they’re not restocking the store.

That’s where it affects me and my neighbors. I live in that building and work from home; I have to sit and listen to a monster truck’s engine and air conditioning units for half of my day. DC drivers aren’t known for their patience so it’s a constant stream of honking and occasional yelling. Columbia Heights is energetic enough without this, thank you.

The people who use the H busses and the Circulator are affected as a truck will make it difficult for a bus to pass. I’ve seen the whole thing completely jammed up on a few occasions as a bus will get stuck and then block 14th St southbound as well as Columbia Road. The day an ambulance got stuck in that mess wasn’t fun, I can only hope the person inside was OK after the lengthy delay to move on.

I’ve talked to 7-11 and they shrug or give platitudes that it’ll be moved soon. Calls to 911 and MPD haven’t worked so far. Calls to 311 and the Parking department haven’t worked either. My first thought was the WMATA might have some influence on asking law enforcement to keep the road clear but complaining about them not being proactive is like berating a badly socialized dog for going through the garbage.

In the grand scheme of things it’s just an inconvenience but it inconveniences a lot of people. What city department can keep the roadway clear? If this was a parked car it would be ticketed and towed in no time at all.”