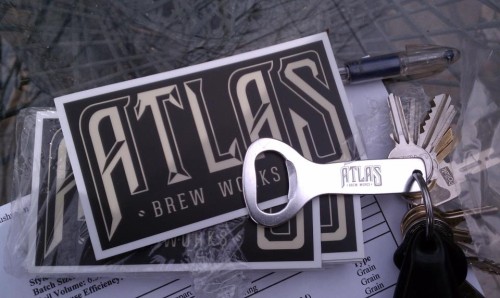 Atlas Brew Works, the District’s newest production craft brewery, today announced the signing of a distribution deal with Premium Distributors of Washington DC, the leader in beer distribution within the District.

“Premium’s track record in craft beer speaks for itself,” said Atlas CEO Justin Cox, “They have the
infrastructure, resources, and professionalism to best represent Atlas in the District.” Atlas Brew Works, founded by Cox and award winning professional brewer Will Durgin, is on track to open this summer with three beers: Rowdy, a hop-forward American-style ale, accented by peppery rye notes, District Common, a California Common featuring Czech Saaz hops, and a third beer which will remain a surprise.

“We are thrilled to be working with a local DC brewery,” commented John Zeltner, President of Premium
Distributors of Washington DC, “Atlas will fill a void in our craft portfolio by offering a DC local and enhance our great selection of beers. Justin and Will are passionate brewers with a commitment to brew high quality beer; we look forward to partnering with them for many years to come.”
The collaborative efforts of Atlas and Premium will guarantee beer drinkers within the District can enjoy a pint of fresh, locally crafted beer wherever fine beverages are served.