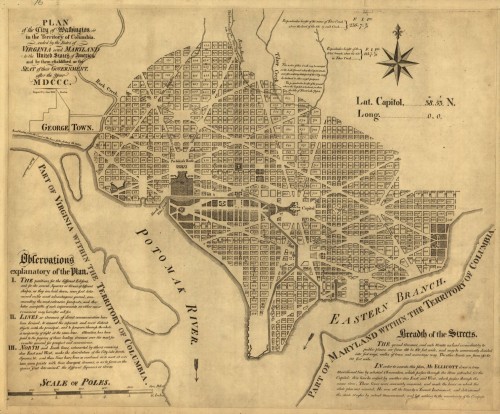 Map of the Week is a new feature by David A., a systems librarian and map geek living in Mt. Pleasant.

Title: Plan of the city of Washington in the territory of Columbia: ceded by the states of Virginia and Maryland to the United States of America, and by them established as the seat of their government, after the year MDCCC

This week’s map was adapted from Pierre L’Enfant’s original vision by Andrew Ellicott in 1792. It is one of the earliest high-resolution digitized maps of DC on the web. Ellicott was originally hired to survey the new territory of Columbia and the city of Washington. Ellicott’s map includes notes on the methods for determining the lines of the city and the breadth of the streets and avenues as well as some comments on the city’s creeks. The city’s squares and circles were placed were placed “…on the most advantageous ground, commanding the most extensive prospects…” at the intersections of the city’s avenues.