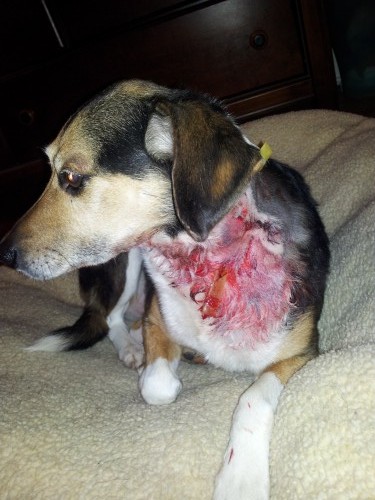 Yesterday evening I was walking my dog on Columbia Rd NW near Warder St when all of a sudden a pitbull came bounding across the street in front on traffic and attacked my dog.

The scene was horrible, it had my poor Lu by the neck and would let go. I was pounding it on its head and body, the owner quickly came over and tried to pry the dogs jaws from my Lu’s neck, but the pitbull would not let go. By this time, people had stopped their cars and one gentleman came over to see if he could help. the pitbull’s owner asked if he had any kind of spray he could spray the dog. He went into his car and got a can and started to spray the dog in the face. Meanwhile I kept pounding the dogs head and the owner was still trying to get its jaws apart. Finally the dog released my Lu.

I had to rush her to the vet where I was told she had a hole a bit larger than a silver dollar and a puncture wound on the neck. Both the dog’s owner and I suffered cuts, bites, and contusions on our hands. One thing I have to say is the owner took full responsibility and called Animal Control. We have a report in and hopefully an officer will come today to inspect Lu.

We had a horrible night, Lu couldn’t stop shaking, and today she is sullen with little appetite, and obviously pain. My hands are sore and swollen. We are two tough ladies and will get through this. But to your readers I just ask please keep your dogs leashed, especially with these large unpredictable dogs, as you never know when your dog will decide to attack. This was unprovoked, and as I said the dog crossed the street to get to mine. I know people say it is not the dog its the owner and how she/he trains the dog, but I sincerely think that this owner is a good owner…something just snapped in her dog.