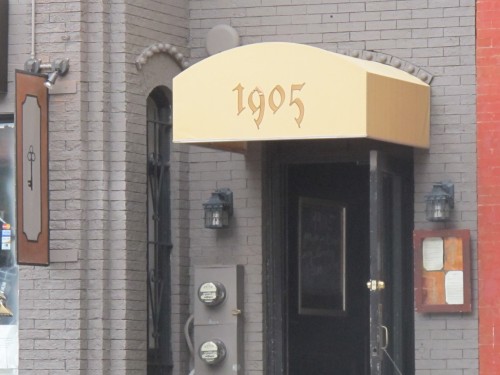 1905 Bistro & Bar is pleased to officially announce that Chef Joel Hatton – formerly of Shaw’s Tavern & Leopold’s Café in DC – has taken over the back of house duties as Executive Chef. Since joining the team at the end of January, the South Carolina native has put a definitive fingerprint on the restaurant, and plans to re-launch the brunch program this weekend with an entirely new menu.

For now, the new brunch menu will be available on Sundays from 11 AM – 3 PM, and features a mix of brunch staples along with a rotating selection of weekly specials. Featured items on the new menu include citrus Greek yogurt with house-made granola and strawberries ($6); chicken and waffle with cayenne honey ($12); truffled grits and pork belly with a sunnyside-up egg and scallions ($12); and an angus beef burger with Swiss cheese and balsamic onions on brioche roll with pickles and salad ($14). Egg options include a three-egg omelette with field greens ($12), a two eggs any style platter with toast and breakfast potatoes ($9), and soft scrambled eggs with cherry tomatoes, aged cheddar and a brioche roll ($10).

The bar is even getting in on the fun during brunch with bottomless options of Bloody Marys, Mimosas, and a Specialty Cocktail of the season for $15. Single glasses of each are also available for $7-$8. There is also a Beer-Mosa for $7, which is a blend of Avery White Rascal and orange juice.

Chef Hatton also has made significant changes to the restaurant’s dinner menu, adding bar snacks and a special Mussels Night on Tuesday nights. The Tuesday Night Mussel Night special includes a bowl of mussels incorporating a local beer in the broth, frites and a can/bottle of beer of your choice for $15. He is also working on a series of beer dinners, beginning next month in collaboration with DC Brau. More details to come!