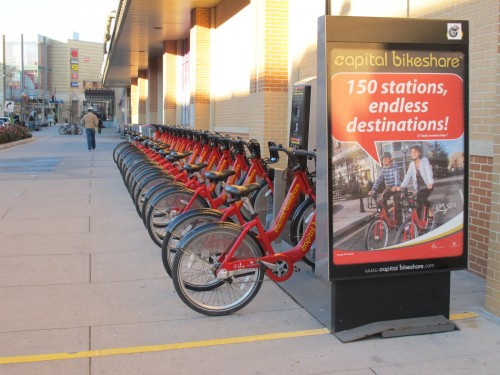 Security measures and traffic restrictions that will be put in place for the upcoming inauguration will have a significant impact on Capital Bikeshare. Please take the time to read the information below regarding the specific impacts the inauguration will have on our service. In the past, the Secret Service have changed plans and have shut down access as events happen so be prepared to change your route or to make new plans. Be flexible!

Station Removals
Due to security measures being put in place for the inauguration, Capital Bikeshare will be completely removing stations in the area of the inaugural parade route (from the Capitol to the White House) starting this week.

Station Reinstallation
Removed stations will be reinstalled starting on Wednesday, January 23rd and be completed by Thursday, January 24th.

Pre- and Post-Inauguration Bike Corrals
In order to accommodate our members while these stations are taken off the street, we will be hosting a bike corral at the 13th and NY NW station from 8am to 10am. The morning corral will be available on the following days:

Please note that while we can guarantee you a place to dock your bike, we cannot guarantee that a bike will be available for your return trip, so please plan accordingly.

Rebalancing During the Inauguration (Monday, January 21st)
Due to the security perimeter established for the inauguration, a significant number of downtown stations will not be accessible to rebalancing vehicles. Other stations outside the perimeter will be difficult to access due to road closures, security measures, and anticipated high volumes of traffic. As a result, we may have difficulty rebalancing many downtown stations. We ask for your patience during this time. Please be sure to consult Spotcycle before starting your trip.

Inaccessible Stations on the National Mall (Monday, January 21st)
There will be two stations on the National Mall that will be out of service during the Inauguration: 14th and Jefferson and 12th and Jefferson (Smithsonian Metro). These stations will be shut down during the event and will open up in the evening after the parade has finished. We are expecting this to be around 7pm.

Inauguration Day Bike Corrals
To accommodate the anticipated high usage of Capital Bikeshare on Monday, January 21st, we will be hosting two bike corrals, one each on the north and south sides of the security perimeter: The north corral will be held at the 17th and K NW station next to Farragut Square. The south corral will be at the 12th and Independence Ave SW (USDA) station. Both corrals will be open from 7am to 5pm. You will be guaranteed a place to drop off your Capital Bikeshare bike but we cannot guarantee a bike for return trips.

Read more →
Flyover, What the Helen of Troy is This

Photo by John M From AlertDC: “US Air Force reports a flyover in the NCR consisting of 2 military aircraft at Arlington National Cemetery on Thursday, October 21, 2021 at…