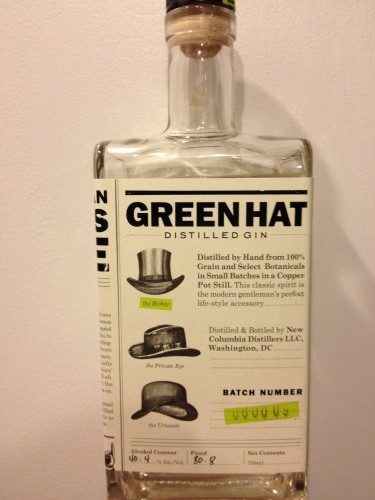 Jeremy Barr is a writer and journalism student. A native of suburban Maryland, he now lives in Mount Vernon Square. He last wrote about his experiences finding a group house.

On Saturday, I tasted Green Hat Gin, billed as the city’s first legally distilled spirit in a century, for the first time. It is produced by Ivy City-based New Columbia Distillers, which began selling .75 liter bottles in early October. I picked up my bottle — part of batch #9, according to the label — at Schneider’s of Capitol Hill, which sells it for $35. (John Uselton, co-owner of New Columbia Distillers, used to be the store’s beer buyer). An employee told me that demand for the product is such that they keep it near the front of the store, rather than on their floor-to-ceiling sale walls.

Seeing as that the city now has three breweries — with the addition of 3 Stars Brewing this summer — I got to thinking about why New Columbia Distillers is by its lonesome. I also wondered why it took so long for the country’s most-stressed out city to have a locally-produced spirit to turn to.

Luckily, DC’s has its very-own alcohol historian. I reached out to Garrett Peck, who literally wrote the book on the city’s hooch history. Prohibition in Washington, DC: How Dry We Weren’t tells the story of a city flush with liquor — dispersed at more than 3,000 speakeasies — at a time when its lawmaker residents had outlawed it.

The book introduces George Cassiday, known as “The Man in the Green Hat” (so, Green Hat Gin) because of his penchant for wearing a green fedora. A legendary bootlegger, Cassiday hawked liquor out of Congressional office buildings before being arrested, bottles in hand.

Over email, Peck shed some light into why he isn’t surprised by how long it took for DC to get its first distillery:

“The microdistillery boom didn’t really start until fairly recently, around 2005. That may seem shockingly late, given how popular craft brewing has been for decades, but it’s true. In that sense, DC isn’t all that late to the microdistillery party, since this is an industry in its infancy.”

Finding adequate space to house brewing and distilling operations has been an issue. “These are quasi-industrial [operations] that require special zoning; DC doesn’t have much industrial space anymore,” he said.

Peck pointed out that many distillers have a background in brewing, as “to distill anything, you first have to brew a beer.” And in that sense, DC was behind the curve on building a craft brewing industry.

“The craft brewing market began bubbling up in the late 1970 with home brewers and small brewers like Sierra Nevada. Most cities developed significant craft brewing industries – heck, just look at Baltimore up the road – but DC lagged significantly. Our last brewery (Christian Heurich) closed in 1956; we didn’t get a craft brewery until 2011 (and since have added two more – with our fourth, Atlas Brew Works, coming online in 2013).”

The permitting process for DC’s first microbrewery in more than half a century, DC Brau, presented challenges. But new companies, including New Columbia Distillers, have been able to learn from their forerunners’ travails, Peck said.

Concerns about demand for beer also contributed to the delay.

“No one really knew if DC would be a beer drinking city again. It’s long been a cocktail and wine city, but would people take to beer? Yes, as it turns out, we do.”

I think we can all agree with that.