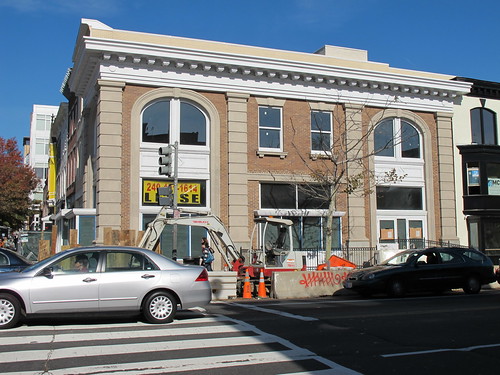 A couple of weeks ago I posted an alcohol application for a nightclub coming to the basement of the corner of 14th and U. A reader wrote a lengthy email (and also posted as a comment):

“Like many other greater U street residents, I’ve been wondering what will finally go into the vacant corner of 14th and U. My friend just informed me that the owners of Local 16, Policy and Josephine’s have signed a lease on the grand old bank building and there are liquor license applications filed for 2 new nightclubs to be opened in the building. As a concerned citizen and avid supporter of the recent revitalization of the U Street corridor, I feel that this is a horrible turn of events.

Having moved from Adams Morgan, I was hoping that my new neighborhood would develop in a more sensible manner. Apparently, that’s not the case. For those of you who are not familiar with Local 16, Policy and Josephine’s, I’d like to provide a little background on these 3 businesses that are merging together to create the most congested corner in DC.

Local 16 has a CR license, but has clearly operated as a bar/nightclub since it’s inception. At one point, they even had cover charge. The establishment is clearly operated as a nightclub. They also have numerous ABC violations. On any given weekend night, nearly 1000 people go through the doors of Local 16 and there is often a large line on the sidewalk. Anything like that would be a disaster at 14th and U.

Policy, like Local 16, also carries a CR license. While it is still a relatively new establishment, it is clear that they are not focused on respecting their obligation to operate as a restaurant. An ABC audit would certainly reveal that Policy is a nightclub in disguise and their food sales ratio is probably woefully low. The business seems to survive on promoted, nightclub events.

Josephine’s is a large nightclub located on Vermont Avenue, NW. This establishment apparently shares some ownership with Policy and their operations are strikingly similar. Josephine’s is very crowded and there is an extra-large security detail there at all times. The expensive cars are lined up 10-deep in front and there is usually a cluster of one to two hundred people waiting on the sidewalk to get in. Recently, the police blotter showed that there was a knock-down, drag-out fight there!

Clearly, a union between these 3 establishments on one of Washington, DC’s premier intersections is a recipe for disaster and would do severe damage to our neighborhood. The following serious problems are the most important to consider:

Another reader responded this evening:

First of all, despite having a “club” liquor license, that does not mean that the basement of the building on 14th and U will be your typical nightclub. In addition, just because the owners of Local 16 (which is a bar, yes, nightclub, no), Policy, and Josephine are working together, does not mean that this will be an extension of their current establishments. Although I cannot speak for Policy, Josephine has never promoted itself as something other than a night club and thus should not be reprimanded for being a nightclub. Please also keep in mind that Local 16 actually does a lot for the community and works very hard to do so.

Also, only the basement of this space has the nightclub license, not the two upper floors. I have taken a look at the placard and it states that the capacity of the basement is just under 300, which disproves your “1000 person on the block” statement. There is nothing posted regarding the other two floors, so I am not sure where you got your two clubs one roof theory. The other club you may be confused with is the one being opened in the old Cue Bar space down the street.

The biggest problem with this all, is that the residents would rather fight against any and all development in this area rather than work with current and potential business owners to ensure that the new businesses are proactive. Half the time, the voluntary agreements end up hurting both parties more than helping. Especially in this economy, we should be happy that these spaces are being opened to bring business to this area. Lets not get carried away by jumping the gun and writing off these places. You would be surprised at the care these business owners are taking to be sure that this space works with the community to build the area into something OTHER than Adams Morgan.”

You can read the comments in full here.