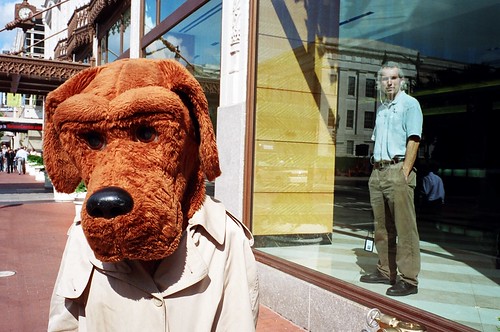 Have you, on your extensive walks, come across a man of this description? He walks around fully decked out for an urban trek, with many layers of tan/khaki/greenish clothes, a walking stick, and a backpack. He’s got a full head of hair and possibly a beard, and looks pretty pleasant. Today he had two metal rods of some sort sticking out of the top of his backpack.

I’ve seen him around Mt. Vernon Square before, but today I saw him when I was running up 14th toward U. I ask because of this – he was approaching me on the sidewalk, and as I ran toward him I said excuse me, like I do, and instead of making adequate room for two to share the sidewalk, he veered in my direction, forcing me into a bush, all with his strange mildly pleasant look on his face. I had headphones on, so I can’t be positive, but I don’t think he said anything (I keep them very low – city running and all). I’m fine – just bruised and scraped up my hip, where I hit big branches – but mostly a little weirded out. Just wondering if you knew anything about this guy.”

Wow, that’s insane. I don’t think I’ve ever passed this guy before. Does this description sound familiar to anyone else?

At about 6pm today (Friday, Oct. 23) I got off the metro at 14th and Irving– tired from work and with my ipod on I was a little zoned out but heard lots of sirens which isn’t completely out of the ordinary. Next thing I know a kid, probably 16 or 17, sprints by me holding a backpack– again I don’t note anything too odd until I suddenly hear shouting and am shoved (nicely but forcefully) into one of the big construction cones on Irving. About 6 police officers on foot proceed to sprint by me in pursuit of the kid who had turned down an ally. The officers were quickly followed by about 4 of 5 marked and unmarked squad cars.

Any word on what may have happened?”

This is the first I’ve heard about this incident. Was anyone else by the CH Metro when this went down? Anyone know if the kid was caught?

More Stories
PoP PSA – Get Yourself Over to Rock Creek Park ASAP!House of the Day