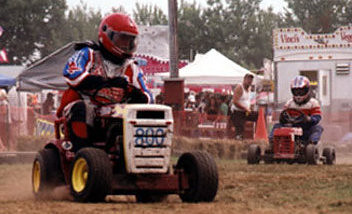 “The Red and the Black will host a fund raiser to benefit the production of On Your Mark, Get Set, MOW! – a Tale of Hope, Redemption, and Lawnmower Racing at the Red and the Black on September 2. Performing will be Pup Tent, Olivia Mancini, and Neon. The Red and the Black is at 1212 H Street, NE, Washington, DC 20002. Doors open at 8pm. Proceeds will enable filmmaker Mike Ratel to finish his documentary on lawn mower racing.

Can lives be saved through lawn mower racing? There is a family in Michigan who hope so. Sparta, Michigan is home to a lawn mower racing family who have lost five members of their family to Huntington’s disease, a hereditary neurodegenerative disorder which 200,000 Americans are at risk for. Washington, DC filmmaker Mike Ratel has followed the sport for two years and is currently in production of a documentary film which will tell the story of lawn mower racing and how it is used to raise research funds and awareness of the deadly disease. Every year in Sparta the family organizes a United States Lawn Mower Racing Association (USLMRA) national points race to raise funds for and awareness of the disease. Congressman Bob Filner of San Diego has appeared on camera for the documentary film as he and fellow Californian Brian Bilbray are the sponsors of the Huntington’s Disease Act of 2009 (HR 678) which if passed will eliminate the two year wait that those diagnosed with the disease currently have to wait before they get Medicare benefits. Through the use of interviews with congressmen, health care professionals, and Huntington’s disease advocates the path of the bill will be documented as part of the film. Additionally, medical professionals will provide a clinical definition of the disease and explain what research is underway to bring an end to it.

Entitled On Your Mark, Get Set, MOW! The documentary film is a tale of hope, redemption, and lawn mower racing. Ratel has spent two years traveling to over ten states documenting the sport of lawn mower racing and the community of racers who are involved in the sport. During this time he has discovered that there is much more to the sport than winning and losing. There are racers who have redeemed their lives though the sport and those who have had the satisfaction of using the sport to raise money to fight diseases such as Huntington’s disease.”