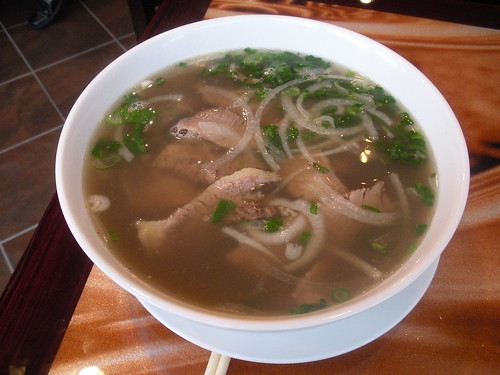 I’ve actually received a few emails about this but wasn’t able to track down an exact location but I still thought it was worth mentioning. The most recent reader writes:

“Last Sunday, on my way to check out Room 11, I passed by a very smoky barbecue on Park Rd. I approached and, asking what’s cooking, found a group of women huddled around a bunch of grilling chicken breasts and a very spicy looking red herbed sauce. They told me they already finished cooking the fish. I asked where they were from, and after telling me Vietnam, asked if I liked Vietnamese food. “Yes!” I said, and few in a few names of vietnamese dishes for street cred. They were quick to tell me that they are opening a Vietnamese restaurant in the neighborhood!!! They said the spot will be on 14th st, a few blocks north up by the gas station (I can’t remember which). The said it will be ready in about a month, and will be called “Pho Viet”.”

Of course Pho 14 recently opened up on Park Road just west of 14th Street. Perhaps the folks behind Pho Viet were inspired by their success. Are you excited by the idea of another Pho spot? I will of course update when more info becomes available.

More Stories
W Street, NW between 14th and 15th Knows How to Throw A Block Party!Dear PoP – Bicyclist Injured on Mass Ave. Anyone Know What Happened?