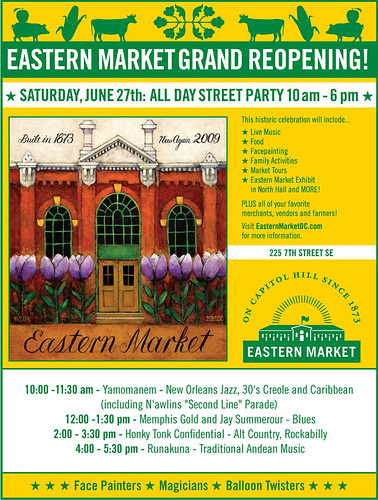 Eastern Market Reopens!  And don’t forget to take some photos of your favorite spot for a morning cup of coffee and enter the new PoP contest. More after the jump 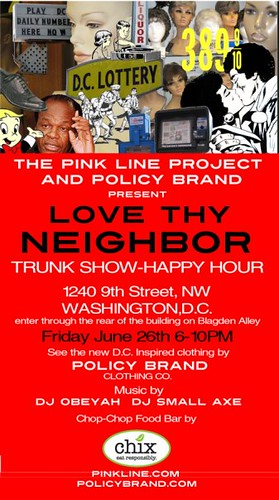 “Policy will be showing a selection of limited edition t-shirts and retro feel little league jerseys celebrating the neighborhoods of Washington, D.C. Previously if you wanted a D.C. t-shirt, you would have to go the mall and get the red white and blue model, not anymore! These shirts are fresh and cool. Ladies, we will also be introducing a wonderful new handbag that will be the envy of all your gal pals.

Policy is also going green with a new branch of the company called, Green Diamond Vintage. This branch will focus on the beauty of vintage baseball jerseys from years gone by. The jerseys are from obscure industrial leagues, Japanese leagues and various leagues from all around the country. Some of these garments date back to the early 1950’s. The jerseys are beautiful and crafted with a pride that no longer exist.” 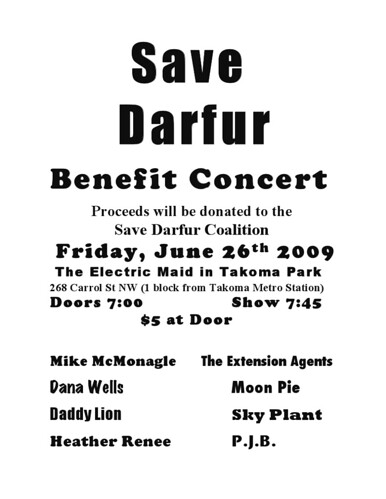 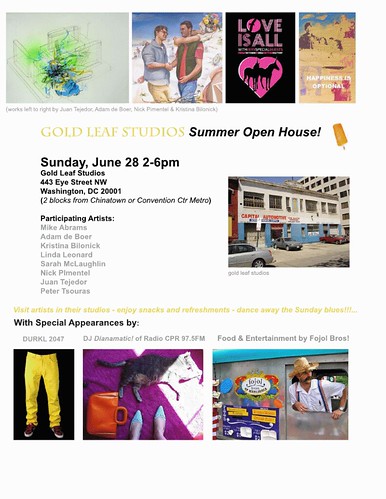 “The Gold Leaf Studios at 443 Eye St NW is having an open house event with art, music, drinks and food, this Sunday, June 28th, from 2-6 pm. All the artists how work here, including myself, will have their studios open. Come check out my work! Hope to see you there! See the attached flyer for more info.

directions from metro:
The studios are located on I st nw, just north of Massachusetts ave. From the Gallery Place Chinatown metro, get out at the 7th and H st exit. Walk east on H to 5th st, then make a left on 5th. Walk past Massachusetts. I street will be on the right. Its a blue and white building on the left side of the street.”

Councilmember Bowser advises everyone to “be in the know”

Ignorance of the law excuses no one. And ignorance of your HIV status is not an excuse for passing it along to someone else. Everyone should get tested.

Three percent of residents in our nation’s capital suffer from HIV or AIDS. According to a report released by the Department of Health, this figure is the highest in the country and greatly surpasses the 1 percent benchmark at which a health issue becomes a “generalized and severe” epidemic. The report found high rates of HIV in almost every neighborhood in Washington D.C.

The District is the last stop of the three-week, fourteen city cross-country AIDS Healthcare Foundation testing tour called Testing USA 2009. The mobile unit is part of AHF’s nationwide effort to increase AIDS awareness and HIV prevention and testing efforts in the hardest-hit parts of the country.

On Saturday, June 27th, National HIV Testing Day, a mobile testing unit will be stationed at the DC Caribbean Carnival as part of its health and wellness campaign to provide free, rapid HIV testing. The festival takes place at Banneker Field, located at Georgia Avenue and Barry Place, near Howard University. The mobile testing unit will be inside Banneker Field from 1 to 5 p.m. on both Saturday and Sunday. At this location, festival attendees can get also get their glucose, blood pressure and cholesterol levels tested.

The Magic Johnson Mobile Testing Unit will be on-site on Sunday. Stationed just outside of Banneker Field, attendees can get tested for HIV only from 1 to 5 p.m. at this location. Also, this mobile testing unit is permanently relocating to DC from Los Angeles.

Yes, National HIV testing day will observed this Saturday but the problem is too great here in the District and nationwide to wait for a special day to get tested. After all, who doesn’t want to be in the know? Visit the Department of Health’s HIV testing page to find a location near you to get tested.

The event is being hosted by the University of the District of Columbia’s Community Outreach & Extension Services, Mayor Adrian M. Fenty’s Office for Community Relations and Services, DC Parks and Recreation and the Rosedale Citizens Alliance. 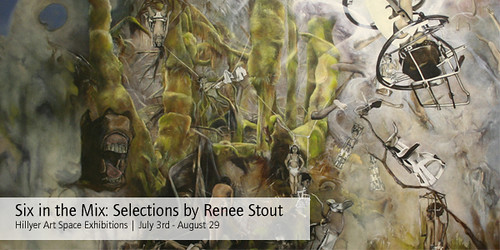 Stout has set out to create a mixed bag of local talent not based in the obligatory conceptual framework predominantly exhibited in group shows. Instead of the varying inspiration and ideas behind the individual bodies of work, it is the “natural dialogue that may occur between these works” which Stout would like the audience to experience. “I also didn’t want the viewer to come into the exhibition with preconceived ideas about the works based on any theme that I had imposed. Instead, I simply chose to select work that resonated with me on an intuitive level, but there is no doubt that my penchant for political conspiracy theories, personal and cultural sensitivity to notions of beauty and my childhood love for horror films and Mad Magazine creeped in during the process,” says Stout. Location: Hillyer Art Space 9 Hillyer Ct. NW (behind The Phillips Collection) Washington, DC 20008”