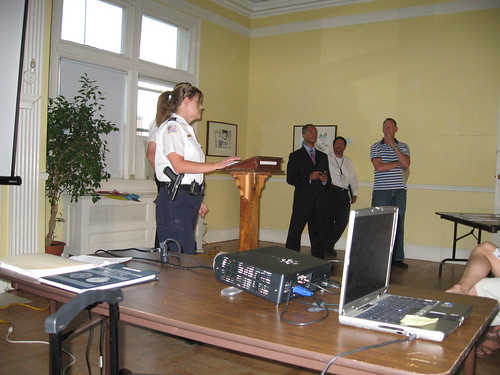 So here’s the scoop on the Saturday night shooting at 14th and Fairmont from the Columbia Heights community meeting last night. The investigation into what happened is still ongoing, and thus not all information could be released, but it appears the shoot out involved two crews. Two individuals, both in their twenties, were apprehended at the scene and have been charged. They were both on foot—rumors of a car being involved are unsubstantiated. Police are also looking into an additional person as possibly being involved—a lot of evidence has been recovered that they’re following up on.

There was a problem with crowd control as and after the two individuals were arrested, and a few friends and family members of the perps did attack the police apparently in protest or to prevent the suspects from being taken away. The four people who were involved in that attack were arrested, and one of those people had a baseball bat. There was also a problem in terms of controlling the surrounding area—police had to prevent several people from returning home while they secured the area and it seems there was a bit of a pandemonium for a while.

Also, and this is very interesting, apparently members of a private security firm that works the Faircliff Plaza East at 1350 Fairmont St were the first on the scene.

Police have been targeting the areas near where the shooting occurred, and it’s comforting to know that the security firm that apprehended the suspects is there every Saturday night. But violent crime has been up in the neighborhood in the past few weeks. I know it puts me, at least, on edge.

Read more →
More Stories
The Restaurant – A Continuing Series By JulianWhat’s The Scoop on Napolean in Adams Morgan?