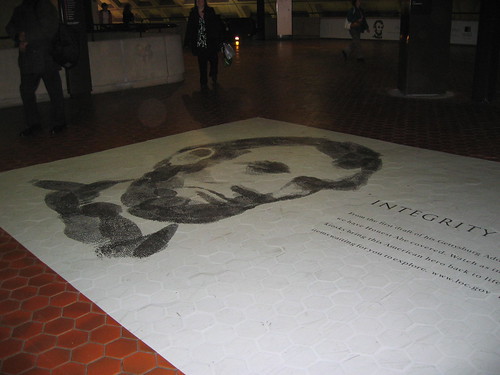 This photograph captures a Library of Congress campaign at the Gallery Place Metro Station. [Incidentally, I wonder if they’ll ever change the name of the metro station to Penn Quarter?] But back to the point, as you can see there is a gigantic portrait of Lincoln on the floor. I always try and walk around it but you know at hockey games and rush hour people are tromping all over Lincoln’s head. I think Saddam Hussein made a big deal out of painting a huge portrait of George H.W. Bush on the floor so that people had to walk all over him. I’m just saying, might not be the most respectful thing for one of greatest Presidents. Am I being too sensitive or is it a bit weird to walk over Lincoln’s head every morning?