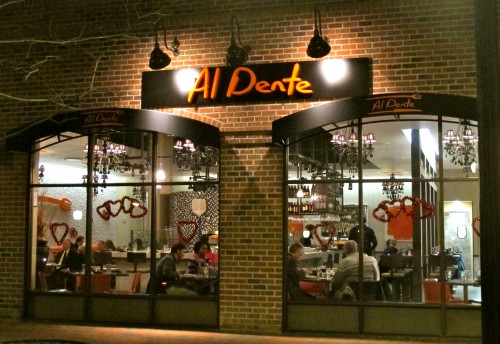 Eating around Town is a new series written by a number of PoPville contributors. Today’s review of Al Dente was written by dcreba. dcreba is a big apple transplant and enthusiast of all things edible. she lives – and often eats – in Logan Circle.

The ever controversial Roberto Donna (Culinary tour de force! Embezzler! James Beard winner!) recently won accolades from Esquire magazine, lauding him as Chef of the Year in their listings of Best New Restaurants in 2012.

This Best New Restaurant is Al Dente. And prior to the Esquire review, I was unaware of its existence. A quick perusal of the literature tracks Donna’s circuitous history: Chef rises to glory with his Italian behemoth, Galileo, which undergoes three different inceptions – and locations – over 16 years. Chef falls from grace with reports of embezzlement and failure to pay his employees. Chef opens La Forchetta in a nondescript building in Wesley Heights, relegated to the kitchen and relieved of financial involvement, leaving this management to owner Hakan Ilhan. Restaurant changes name to avoid litigious goings on with a similarly named Adams Morgan restaurant, La Fourchette. This brings us to present day, where Donna is hoping to rewrite history – or at least change the course of things, moving forward – at the helm of Al Dente.

We visit Al Dente on a chilly Monday night. The restaurant is brightly lit and awash in Valentines decorations. My dining companion, with an excellent eye for design, did a calculated 360 sweep of the restaurant and pronounced its aesthetics distracting. “I’m not sure I can take the food seriously, when its decorated like this,” she said warily. As our meal unfolded before us over the next few hours, there were some clunkers, yes, but very pleasant surprises as well, and it became possible to lose sight of our surroundings and focus on the food at hand.

Continues after the jump. END_OF_DOCUMENT_TOKEN_TO_BE_REPLACED

The current subject house is of interest on one hand because in a whirlwind market cycle in DC, this property was listed and re-listed a total of three times since August 2011. Bottom line, it took a relatively long time to sell this house given current market stats. Whereas many buyers get to a point where they are focusing only upon newly listed inventory, here is a good example of why it’s useful to continue to check the entire listing inventory. Because the listing days for the property continue to accrue even when the property is re-entered as a new listing, it may have fallen outside the radar of buyers once the price entered into a more realistic zone.

Someone mentioned in the comments that there are similar homes in the Brookland neighborhood for significantly less, which is true. There are actually quite a few neighborhoods in DC that have cute bungalows. Here is a list of bungalow style detached homes sold since the beginning of 2012 throughout DC. The list is ordered by settled price.

Continues after the jump. END_OF_DOCUMENT_TOKEN_TO_BE_REPLACED Any idea when the new restaurant, La Forchetta, in AU Park is opening? I walked by this weekend and it looks almost done.”

I went to snap some photos on Sunday and a guy out front told me they would be opening April 2nd. He also said they were finalizing the menu and it should be complete later this week. Late last month we learned that Roberto Donna would be the chef of La Forchetta coming to 3201 New Mexico Avenue, NW (in the same complex as Chef Geoff’s.) The paper has also come off most of the windows: In late Jan. 2012 a reader told us that La Forchetta, formerly Al Forno Pizza coming to 3201 New Mexico Avenue, NW near American University hoped to open in March. More details about the space were revealed yesterday.

Hakan Ilhan, the owner of the local Pizza Autentica chain, has signed a one-year contract with the James Beard Award-winning Italian chef to head up the kitchen of a 116-seat restaurant called La Forchetta (formerly Balducci’s) at 3201 New Mexico Ave. NW. The restaurant, which will feature a wood-burning pizza oven and two open kitchens, is expected to serve fresh fish and house-made pasta and sausage – “Italian country, family-style,” says Donna — as early as the end of March.