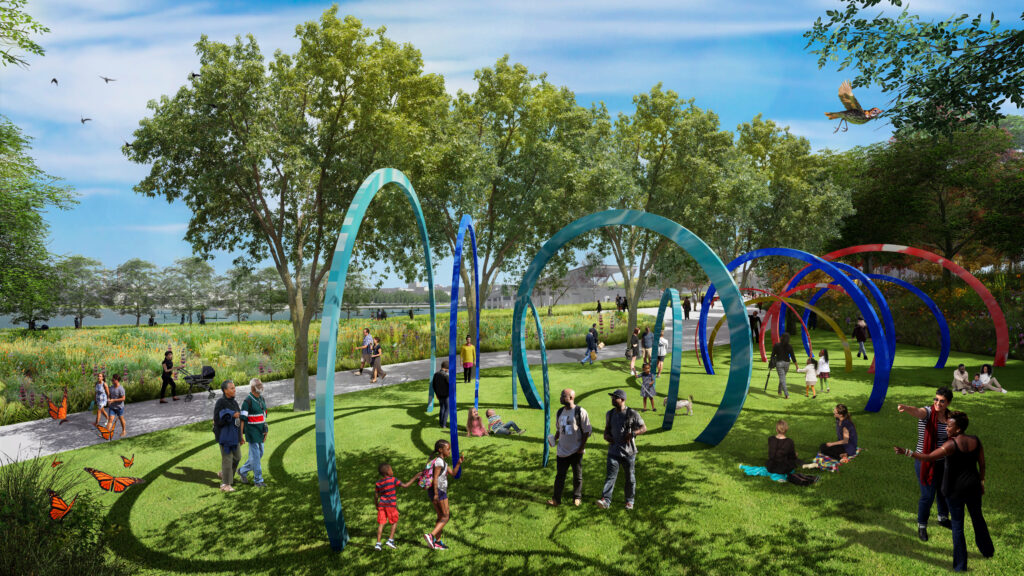 From the 11th Street Bridge Park:

“Today,​ the 11th Street Bridge Park​ – a partnership between the local non-profit Building Bridges Across the River (BBAR) and the District government – announced the selection of  “Anacostia’s Sunrise/Sunset Portals” by DC-based artists Martha Jackson Jarvis and Njena Surae Jarvis of Jackson Jarvis Studio as the park’s first and largest commissioned artwork. 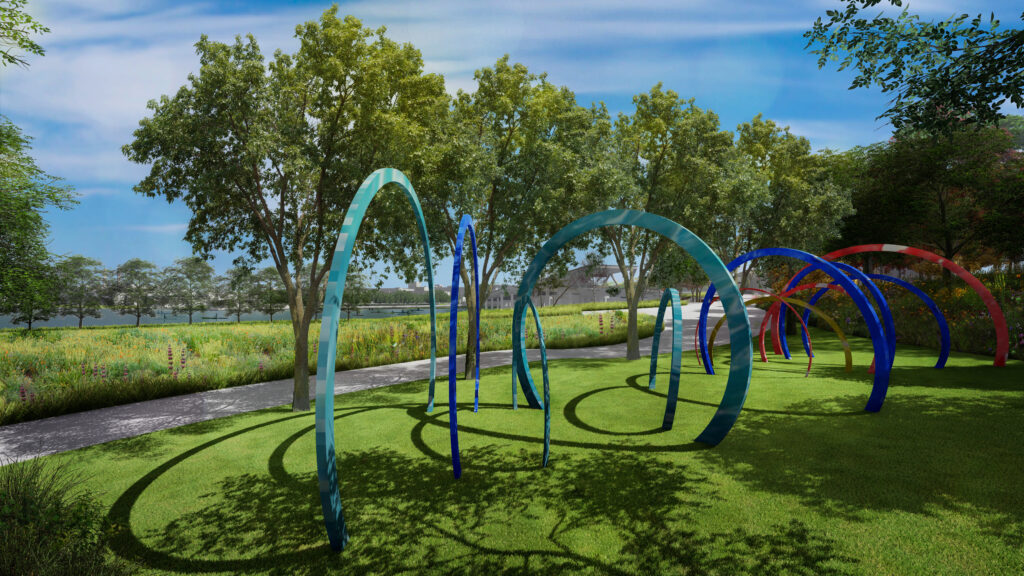 Selected by the 11th Street Bridge Park Curatorial Committee, the $400,000 commissioned piece will help orient and invite visitors into the park and welcome neighbors home to historic Anacostia. The site for this artwork will act as a gateway to the 11th Street Bridge Park and in a highly visible, public green space along the river’s edge that is referred to as the “Anacostia Approach.” Jackson Jarvis Studio’s transformative public art commissions appear across the country including at the Anacostia Metro Station, Prince George’s County Courthouse, New York Transit Authority, among others.

“The notion of energy and rhythm of a capillary wave as it moves across the river, brings light, color, and reflection into the landscape and into the Anacostia community,” said artist Martha Jackson Jarvis. “Visitors experience the unobstructed rhythms of the landscape and cascades of seasonal color and reflection as they travel through eleven arching portals, designed to fascinate and invite discovery of the site and its many gifts.”

Through sculpture, public art, and studio production Martha Jackson Jarvis’ body of work investigates scale, intrinsic material structure, and imagined form. Her numerous awards include a Creative Capital Grant, Virginia Groot Fellowship, and National Endowment for the Arts Fellowship, and her sculptures have been exhibited in solo and group exhibitions in galleries and museums including the Corcoran Gallery of Art, the Studio Museum of Harlem, and the Pennsylvania Academy of Fine Art. Born in Lynchburg, Virginia, Jackson Jarvis spent her formative years in Philadelphia before studying at Howard University and later earning her Bachelor of Fine Arts degree from the Tyler School of Art at Temple University and Master of Fine Arts from Antioch University. She resides in Washington, DC where she has been deeply embedded in the local creative community for several decades not only as working artist, but as an advocate, mentor and thought leader.

“Our ‘Anacostia Portals’ function as a beacon, a symbol of hope and welcome to the 11th Street Bridge Park community celebrating the historic Anacostia River biome,” said artist Njena Surae Jarvis. “The piece invites movement through the rubric of forms to make discoveries and see the place where they are as extraordinary, meaningful and part of a prescient call to engage and celebrate natural resources of a unique public site.”

Njena Surae Jarvis is a multi-media sculptor, painter, and performance artist whose work examines the balance between the essence and freedom of form with science of function focusing on experimental processes. She has worked in many mediums including, glass mosaic, leather, fiber, electro-forming, traditionally and experimentally. Her work has been in numerous group shows including exhibitions at the National Portrait Gallery, The Smith Center for Healing Arts, and has solo works in the private collections of Peggy Cooper Kafritz, Kilolo Luckett and Woodlawn Pope Lehey, a site of the National Trust for Historic Preservation. Born in Washington DC, Jarvis attended Duke Ellington School of the Arts and later studied at The Cooper Union for the Advancement of Science and Art.

“The 11th Street Bridge Park is a community-imagined space and it was important that the art and artists selected for our largest commissioned piece be reflective of this community,” said Scott Kratz, Senior Vice President at Building Bridges Across the River. “We’re ecstatic to see Jackson Jarvis Studio’s vision for “Anacostia’s Sunrise/Sunset Portals” come to life and bring a welcoming energy to the park’s eastern entrance while helping expand equitable access to art East of the River.”

This commissioned artwork is the largest of five total that will be part of the 11th Street Bridge Park’s opening in 2025. The remaining four will be announced in late April. The selection process for all five commissions is led by Forecast Public Art in collaboration with D.C.-based artist Irfana Jetha Noorani. Design for the 11th Street Bridge Park began in October 2014 after a seven-month competition to create the vision for the project, from which the design team of OMA+OLIN was selected. The Bridge Park also drew on an extensive community outreach and a consultative process, anchored by more than 1,000 stakeholder meetings for design, development and impact.  Pre-construction began in 2016 and the Park is expected to open by early 2025.”

Thanks to Gilles for sending this gorgeous 1964 Chevrolet at Franklin Park.”

photo by D. Garrett “Dear PoPville, Saturday (7/25 afternoon) I was walking on the Metropolitan Branch Trail with my full backpack and a bouquet of flowers from the Noma stop…