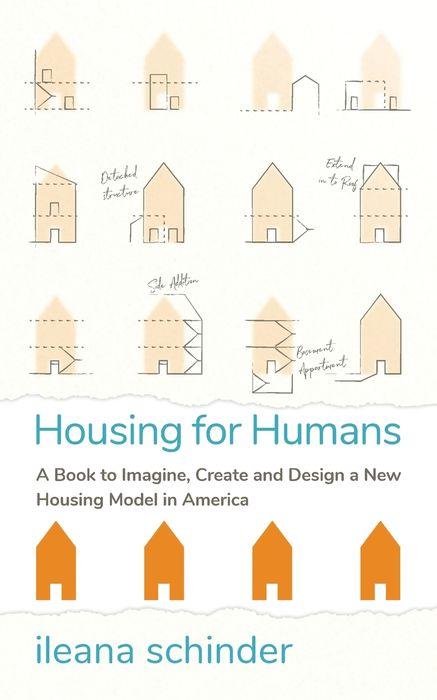 Ileana Schinder is an architect in Washington, DC. She graduated with a Bachelor’s in Architecture from Universidad Nacional de Cordoba (Argentina, 2000) and a M.A. in Communications from the American University (Washington DC, 2006)

Ileana is the Author of “Housing for Humans: A book to imagine, Create and Design a New Housing Model in America” Ileana was born and raised in Argentina. She lives in Washington, DC with her family and her dog, Cecilia.

As public debates of new zoning rules and livability plans heat up in the region, we wonder: can zoning solve our current housing crisis? Yes, and here is how.

The lack of innovative housing options is the result of an outdated zoning approach to residential design. In the past, homes and every other activity was divided by swaths of land: work, play and life were tied by wide roads and car dependent. Limiting one house per also kept limited offer of housing while population grew at a faster pace.

Also, not only zoning rules limit how many, and which shape the homes will be, they also limit the number families that can occupy a property. So, with today’s zoning code, a homeowner can easily erect a garage, or a storage shed, but it bans the same homeowner in creating an additional dwelling unit of the same shape. Even if the architectural addition were to be identical, the zoning code is clear: you are not allowed to house more humans, but you have permission to create space for more cars and stuff.

The right of housing cars has a direct relationship to the availability of houses where land is plentiful. Not only it limits the number of dwelling units per neighborhood, but it also limits the potential of existing homeowners to add value through rent income.

This housing versus parking reality is almost universal in most counties of the United States today.

Low impact projects, like additional dwelling units and other denser designs, have the ability to provide options to the current and future family formats.

Families today are far different from the ones that designed and built most of the housing stock. People marry at later stages in life, and they do so more than once. Children that leave the home for college often come back burdened with student debt and looking for a career path. Retirees restart their career and live longer, while looking to reduce fixed costs like housing. More families are multi-generational and share obligations in the household, from childcare to maintenance. More families come from a wider world with a more diverse cultural background. More people are working from home and will remain doing so in the future. So how will we house those families?

Gentle density through townhouses, additional dwelling units and other residential typologies create a synergy to benefit existing and future neighbors. It adds demand for local businesses: those home-workers will visit the local coffee shop for meetings. It adds eyes on the streets: a refurbished garage contributes to the safety of alleyways. It adds smaller and affordable units in areas where only expensive options exist today. And it’s all in the zoning code.

Opponents of housing density in existing neighborhoods entertain a series of arguments to prevent changes in the existing zoning regulations. The myth of parking is debunked when we see that younger generations drive less, and, most importantly are less interested in owning a car and more like to use public transit and care share options. Parking is currently plentiful in low density neighborhoods, filled with long curbs and driveways. The myth of school overcrowding is debunked when we see that school choices are not based on housing affordability but quality of the regional education. School overcrowding is not a housing problem, is a political one, attractive neighborhoods should have well-funded public schools. New neighbors in a denser neighborhood contribute tax funds to improve infrastructure that is shared with all, homeowners and renters, school kids and retirees.

All along, when we thought that houses of the future would be inspired by a Jetsons’ cartoon, we are learning that it’s simpler and easier than that. The future of housing is right here. It’s the garage that used to house cans of dry paint and now allows grandma to live closer to the grandkids. It’s the basement that houses the teachers that work in the neighborhood school. Housing of the future will be created when we value people more than stuff, when we allow for the new, the different, the others to live closer, better, longer in the areas we already love. The houses of the future are already here, just waiting for us to open the door.

About Housing for Humans

Schinder’s new book, Housing for Humans: A Book to Imagine, Create and Design a New Housing Model in America, is a provocative exploration into the history and causes of America’s housing crisis that challenges homeowners, policymakers and designers to re-imagine the future of housing for an ever-evolving population.

Schinder makes a compelling case for the design and implementation of additional dwelling units (ADUs) as a way to address the needs of the aging population, boomerang kids and others. Transforming existing spaces, like basements and garages, that once housed “stuff” into livable spaces that now house people has become her passion, and these projects form the infrastructure of Housing for Humans.

By normalizing the economic and personal realities of families in need of affordable housing that offers equitable access to community resources, Schinder launches a much-needed conversation regarding America’s prohibitively expensive housing market and provides a viable, sustainable solution.

About the Author
Ileana Schinder is an architect in Washington, D.C. She graduated with a Bachelor’s in Architecture from Universidad Nacional de Cordoba (Argentina) and an M.A. in Communications from the American University (Washington, D.C.). Inspired to become an architect at age 4 by playing with Legos, she remains motivated to design houses of all sizes 40 years later. Since opening her architecture studio in 2014, she has designed additional dwelling units that create new spaces for clients and their families to thrive. To educate the public on housing issues, Ileana also writes blogs and holds educational sessions to inspire and promote innovative models of homes. Born and raised in Argentina, Ileana lives in Washington, D.C., with her family and their dog, Cecilia.