“Agents from the Force Investigation Team of the Metropolitan Police Department’s (MPD) Internal Affairs Bureau are investigating an MPD officer involved shooting that occurred on Sunday, October 10, 2021, in the 800 block of S Street, Northwest.

Uniformed members of the Third District were patrolling the area of the 800 block of S Street, NW, in response to a large number of recent theft from motor vehicles. At approximately 2:21 a.m., a uniformed patrol sergeant observed a male individual inside of a parked vehicle. The sergeant approached the vehicle and gave the individual numerous commands to show their hands. The individual opened the passenger side door and was observed to be in possession of a handgun. The individual shut the door and went to the driver’s side of the vehicle where the individual exited while still in possession of the handgun.

The sergeant discharged their weapon one time, striking the individual. DC Fire and Emergency Medical Services responded to the scene and transported the individual to a local area hospital for treatment of a non-life threatening injury.

On Sunday, October 10, 2021, a 17 year-old juvenile male, of Northeast, Washington, DC, was arrested and charged with Assault on a Police Officer While Armed, Carrying a Pistol Without a License, Possession of an Unregistered Firearm, Possession of Unregistered Ammunition, Theft From a Motor Vehicle, and Destruction of Property. 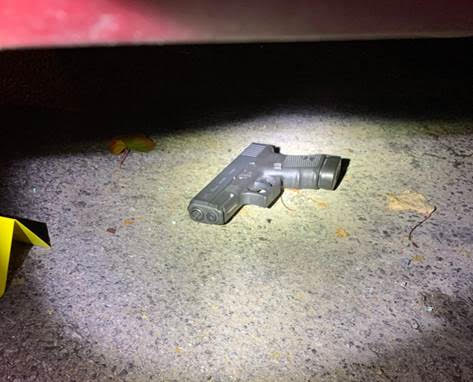 The MPD member involved has been placed on administrative leave, pursuant to MPD policy. Body worn camera footage from this incident is currently under review.